As you may recall from this post, I took the nasty, dirty carpet off our stairs. 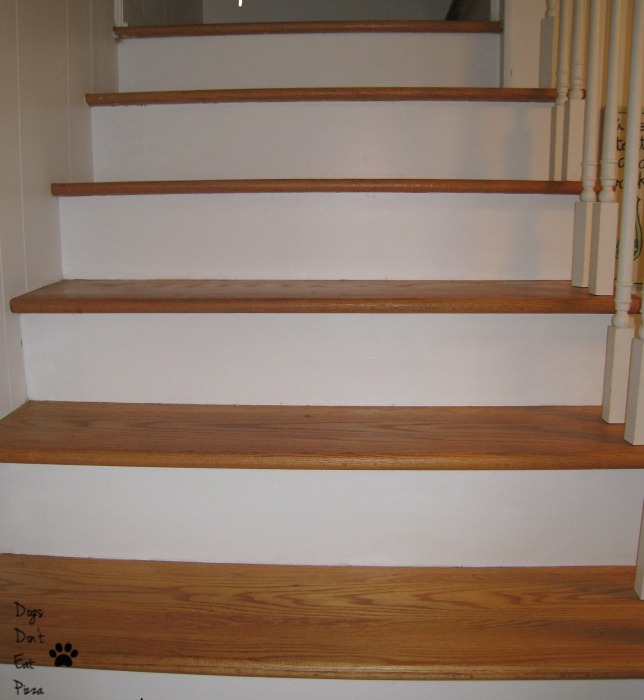 Then our dogs starting falling, Scooby-Doo-style, down the stairs.  I sent out a wood stairs SOS and you replied with great ideas.

I liked my friend Hilary’s idea to train the dogs to go down the stairs slowly.  Not only was this the least expensive idea (dog training I can do = free), but avoided the less-than-attractive, utilitarian carpet treads I had ordered that I really didn’t like.

Well, apparently training can only go so far. I mean, when you have a squirrel outside the window, or neighbors jogging down your street, man, you have to RUN to the window and bark as soon as caninely possible.  You can’t think about doing anything slowly.  Stairs shmairs.

And down they would go, slipping and sliding the whole way.  Training flung out the window.

Back to the drawing board.

The other day, I was reading the blog Cleverly Inspired and saw where she had removed carpet from her stairs and put these nice-looking sisal treads on her stairs.  They weren’t as pretty as the bare wood, but they were better than the beige carpet pieces I had ordered and they matched the sisal runner in our adjacent hallway.

So, I ordered them. The website said that the treads were “pet-friendly,” so I’m taking it at its word.  That said, they haven’t met Bear and Hank.

The treads arrived Friday and I installed them today.  Whaddaya think? 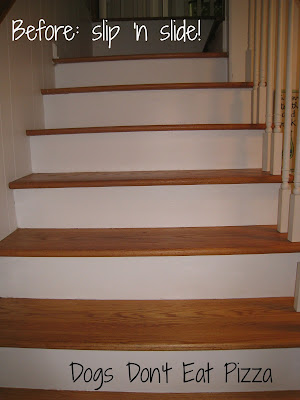 Not too bad, right?  Actually kind of ok.

I ordered them from Natural Area Rugs.  (This isn’t a sponsored post; this is just what I did.) It took about a week for them to get here after I ordered them.

You know, they aren’t as pretty as the wood.  But I will sleep better knowing that the dogs have some traction when they go down the steps.

Note: One friend had suggested that I put rubber-soled slippers on the dogs’ feet.  My dogs (and, honestly, any self-respecting dog) would not put up with that, but I did see some at PetSmart last time I was there buying dog food.  They even sold Halloween ones.  Who knew?