My son’s birthday was on Monday, and he requested a “cookies & cream ice cream cake.” Rather than purchase one that would only taste “eh” and have all kinds of artificial colors and stuff in and on it, I decided to make the cake. I didn’t have a recipe. I wung it. The result? My son says it’s “the best cake ever.” 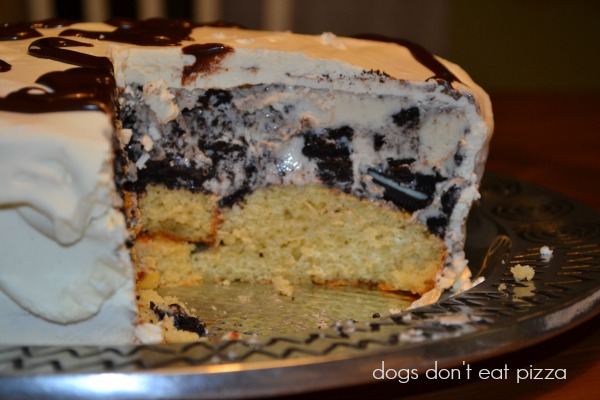 Here’s how I made it.

1 recipe for a layer cake – you need to end up with at least two 8-inch cake rounds; use chocolate or vanilla cake

First, take the ice cream out of the freezer to soften. I used a half-gallon of organic vanilla ice cream.

Then, make the cake. I used Mark Bittman’s golden layer cake recipe in How to Cook Everything, but you could use any layer cake recipe, chocolate or vanilla. I chose yellow/vanilla cake because my son is a vanilla guy and I knew that’s what he wanted. In any event, you need to end up with at least two 8-inch cake rounds.

While the cake bakes, make the cookies and cream ice cream layer.

Now, this is funny. I went to the store and looked for cookies and cream ice cream that didn’t have high fructose corn syrup in it or any other junk, and I couldn’t find anything. So, I bought organic vanilla ice cream. So far, so good. 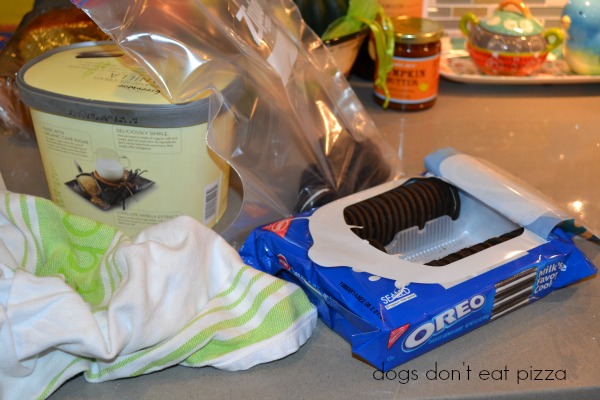 I would have liked this to be an all-natural venture, but I did the best I could under the circumstances.

Anyway, put all but about 10 or 12 of the sandwich cookies in a zip-top bag and beat the stew out of it. Use your hands or a rolling pin and just break up those babies. You don’t want fine crumbs, but small chunks of cookie.

Then, mix the contents of the bag with the ice cream in a large bowl. 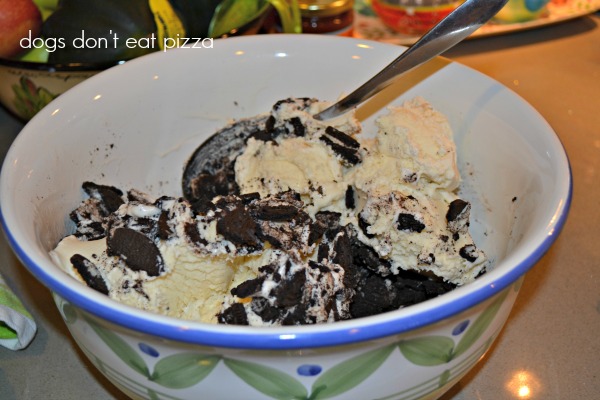 Once mixed, cover and return to the freezer.

Remove the cakes from the oven and let cool on a rack until at room temperature. Once at room temperature, break up the layers and put into the bottom of a springform pan. I tried to keep edge pieces along the edge, and I cared less about how the middle looked. Press down to make sure the entire bottom of the pan is covered with cake, cover with plastic wrap, and put in the freezer for at least one hour.

To ice the cake, I used whipped cream. I simply whipped heavy cream in my electric mixer with two tablespoons of sugar and a teaspoon of vanilla until soft peaks formed. 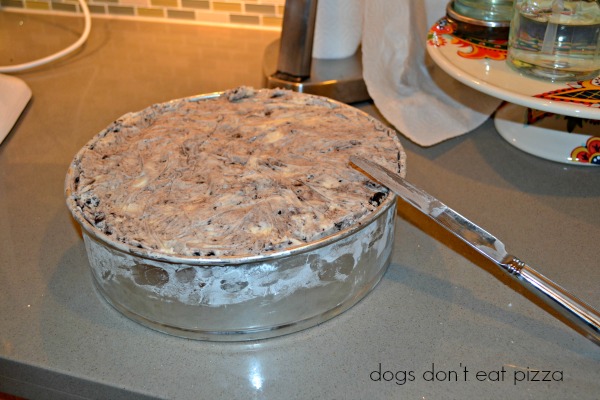 The cake should have these layers: 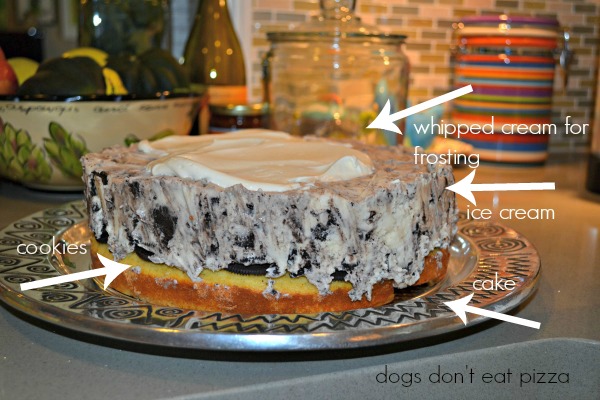 Once frosted with the whipped cream, return to the freezer for at least half an hour. I just put it in the freezer on the bottom of the springform pan. (I didn’t want to cover it in plastic wrap and mess up the frosting.) 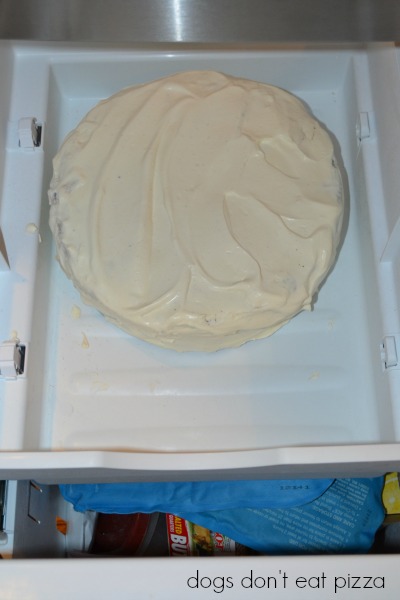 After that, decorate as you wish. I used Trader Joe’s organic chocolate syrup, but with a smaller squeeze top (from a Hershey’s syrup bottle) to make writing easier. (That said, the writing still isn’t pretty. Oh well. It did taste good!) Return to the freezer to let the writing/syrup harden a little (it won’t harden a lot, FYI). 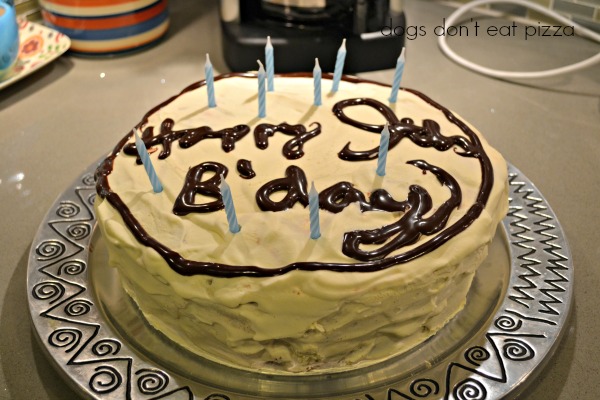 Take the cake out of the freezer for at least 5 minutes before serving – it makes cutting it easier.

Then watch as your family and/or friends devour it.

My son gave me a thumbs up and declared it the best cake he’d ever eaten. High praise from a sweets-lover like him!

P.S. I know this sounds like a long and involved process for cake, but it really wasn’t. During the freezing wait times, I wrapped his presents, answered emails, ran errands, had lunch with him at his school, etc. The hands-on time is really short.

Thank you for stopping by!