You are here: Home / Friday Five / Five Things You Need When Moving a Parent

Good morning, friends. I know it’s Saturday, which means The Friday Five is a day late. This weekend, I’m in the city I grew up in, helping my mom move from the house we grew up in into an apartment. The Internet hasn’t been hooked up yet and I’ve spent most hours packing and moving boxes. 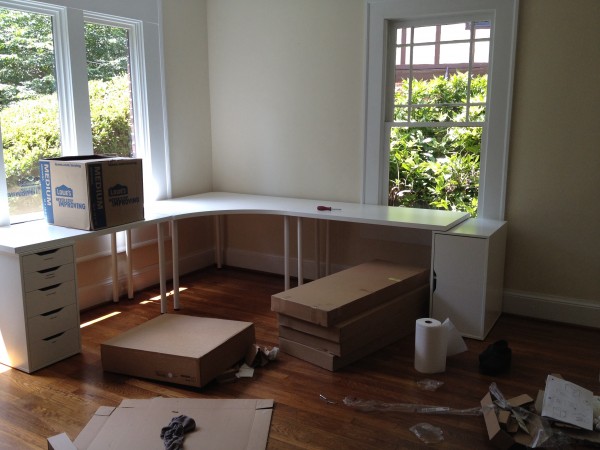 This is my house when we moved, but you get the idea!

So when I was thinking about this week’s Friday Five, I wondered if there were five things I could share with you about moving a parent. Some of you may have helped a parent move already; parents get older, children leave the nest, and a family-size house is just too much for one or two people, who are getting older, to take care of.

Based on my experience with this, here are five things you need when moving a parent:

Before I left for this trip, I asked my mother if I should bring anything. She said no. I was driving here, so I knew that I had room in the car to bring whatever was needed. But she said she had tools and I listened and didn’t bring my tools.

In hindsight, I should have brought my tools.

You need them – there are 1,000 little things that need tweaking in both the old house and the new place. For example, Mom needed some shelves hung in her new closet. If I had followed my instinct, I would have had my drill here and could have easily hung them up, rather than having to call a handy man or friend to do it. My hammer would have been helpful to get those pesky nails and hooks out of the walls. A level is key to hanging artwork. You get the idea. Bring a few key tools.

Anyone who knows me knows that I eat about every three hours. It’s just the way my body is programmed. But when you’re moving, things are hectic. You want to get things done. You lose track of time. And then, you end up hangry: that angry feeling that only comes when you need to eat.

Bring healthy food with you. I have a bag in my car with Lara Bars, apples, and bananas. Good energy, but you don’t need to find a plate or silverware to eat them. Three times yesterday, I forgot to have a snack. We were rocking and rolling and I just didn’t eat. And then I became Hangry Karen: the girl who gets mad at everything and can’t say anything nice. It’s like that commercial where the guy turns into Abe Vigoda because he hasn’t eaten. That was me.

I wrote this last heading maybe three times before settling on calling it Grace – rather than peace, love, or understanding (with apologies to Elvis Costello). Maybe I like Grace because I was listening to Anne Lamott in the car on the way here and she’s big on grace.

Grace is a more amorphous concept that, to me, embodies peace, love, understanding, and forgiveness.

Moving is stressful on even the springiest chicken. But move someone who’s nearly 70, who has lived in a house for 40 years, who has collected more stuff than any one person – let alone six – should have, who has memories and emotions tied up in this building and maybe some of those things, and you are going to need a big dose of grace, friend.

Case in point: yesterday, we spent the day emptying every closet in the house. My mother tends to “collect” things: you wouldn’t believe how many serving bowls and dishes and napkins and placemats and other stuff she has. More than maybe six families need to own, honestly. And now we were faced with the task of either moving it into a smaller place, or donating it to a worthy cause.

I started off this emptying and weeding out process with more of a scorched-earth-type policy: let’s just get this stuff outta here. But that isn’t grace. It doesn’t consider that, while, for the life of you, you cannot understand how any one person needs six cheese scrapers and a drawer-full of small knives for slicing cheese off a cheese tray at a party, the owner of said cheese accessories might be attached to them for some odd reason that is beyond your comprehension. (To be fair, Mom ended up giving away all but two cheese scrapers and a couple of the little knives. I put them quickly in my car in the donate pile before she could change her mind.)

Anyway, the point is that you have to have some understanding here that, while you don’t understand what the person is attached to and why, she’s still attached, and you have to treat that whole parting/weeding out process with grace – understanding, forgiveness, and many deep breaths.

Moving is hard on anyone (says the girl who moved a few months ago). But it’s particularly hard on someone who’s lived in the same place for an extended period and is having a hard time with leaving said place. It takes a long time and a lot of effort to move all that stuff, or move some of that stuff and donate the rest.

Many times over the last couple of days, I’ve found myself taking deep breaths. Not speaking the first thing that came to mind and waiting until the urge to scream passed. This might be the most important thing you bring to a move like this.

Oh, and coffee. You’re going to need lots and lots of coffee.

Have you helped move a parent? What advice do you have?