But it is, finally! So, without further ado, the guest bathroom!

Wait! Want to see what it looked like before the makeover? Let’s harken back.

This is what it looked like when we moved into the bungalow: 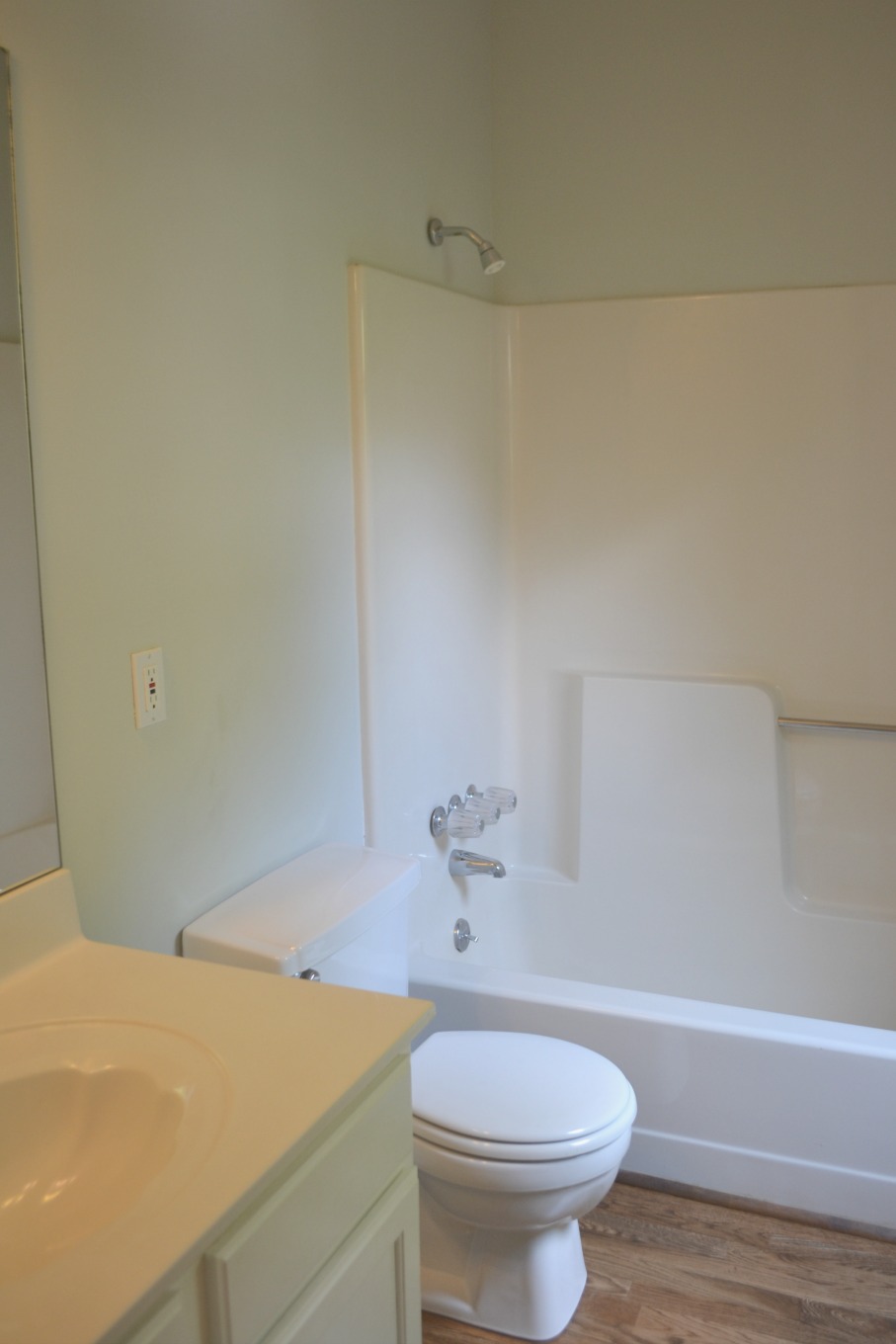 This is what it looked like right before this makeover: 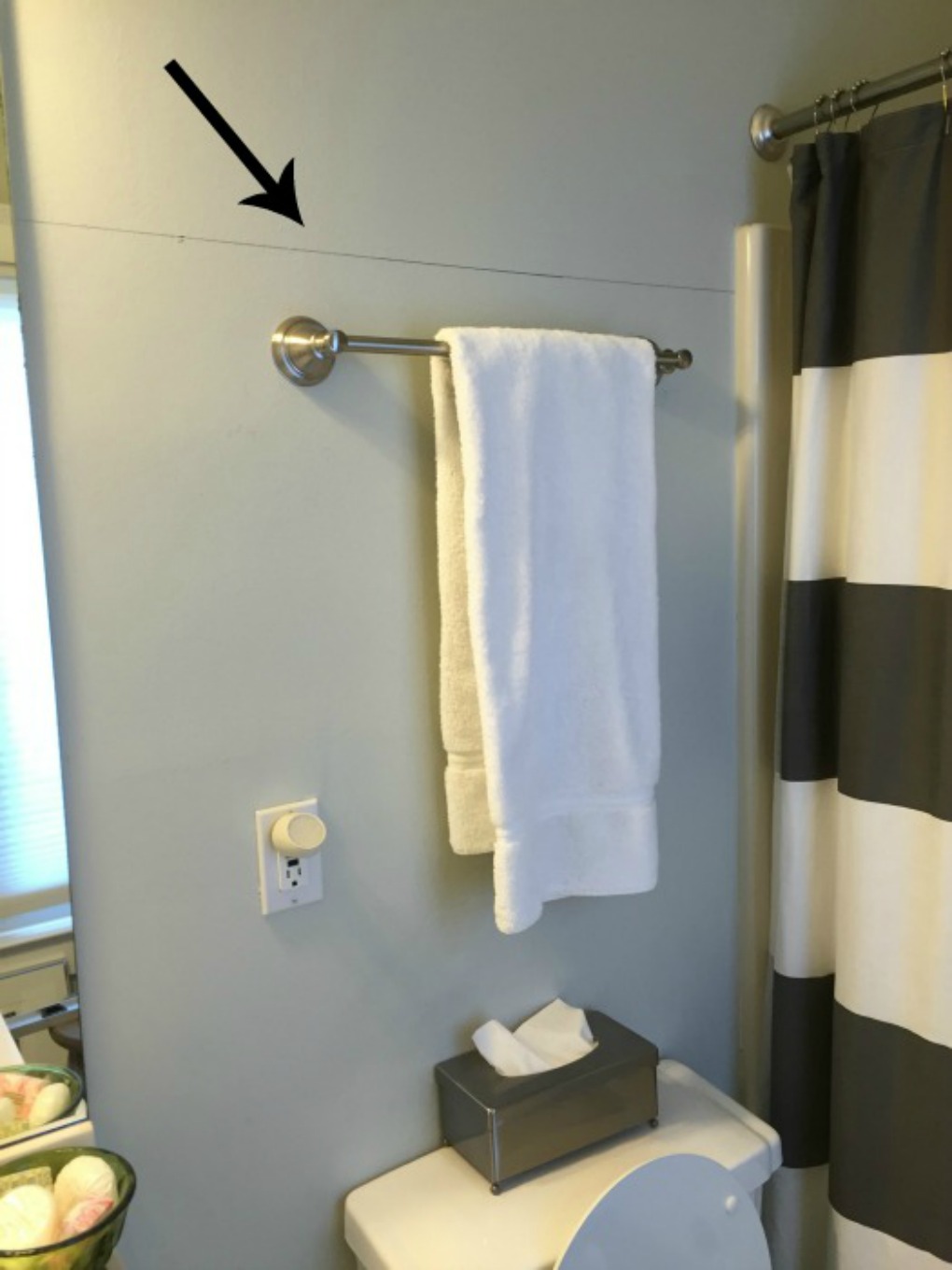 Click on the photo for the list of changes to the guest bathroom I had planned to do. 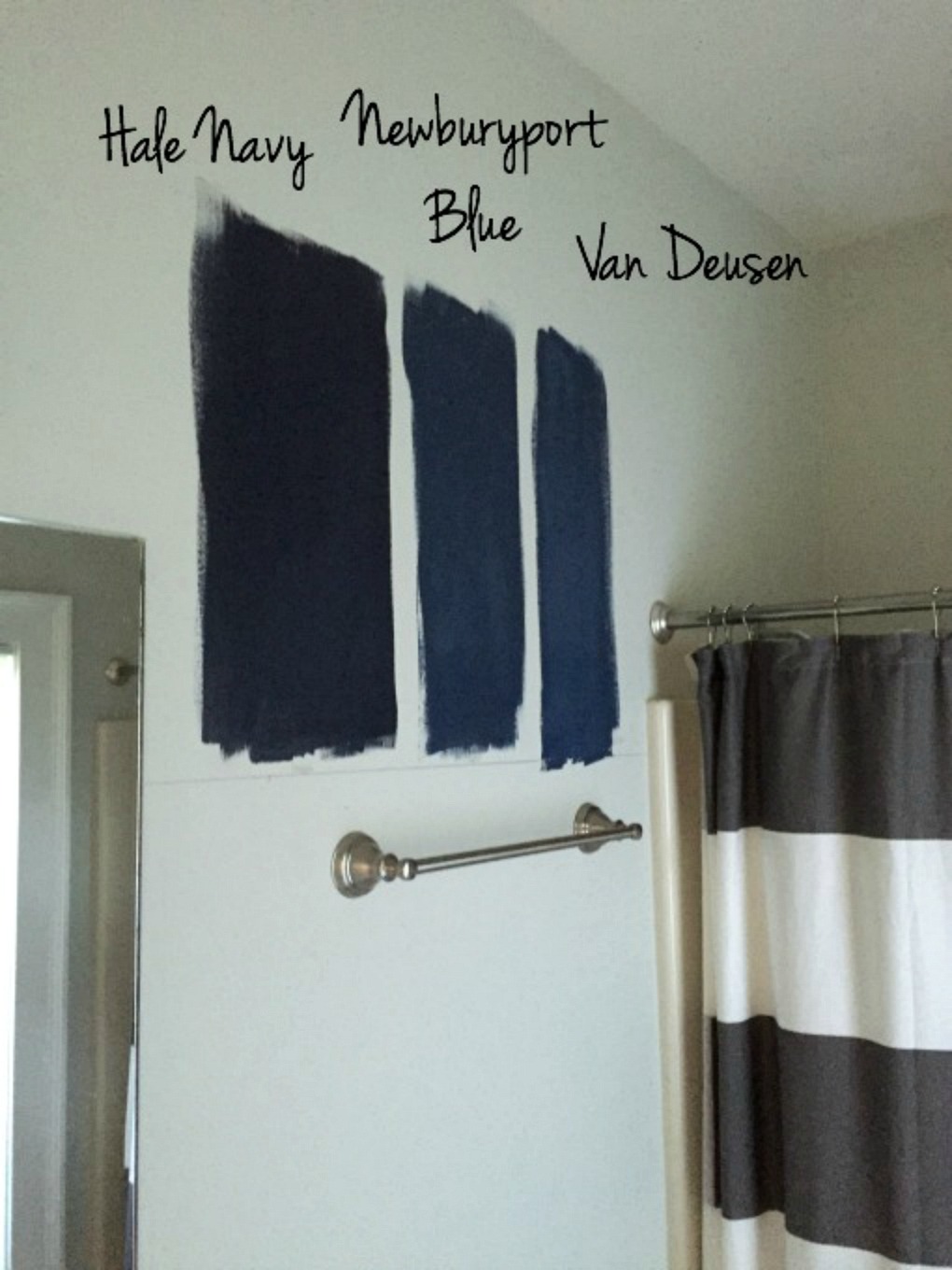 I changed the shades on the light fixture, from victorian-ish to more industrial/modern (which is when I fell off the ladder): 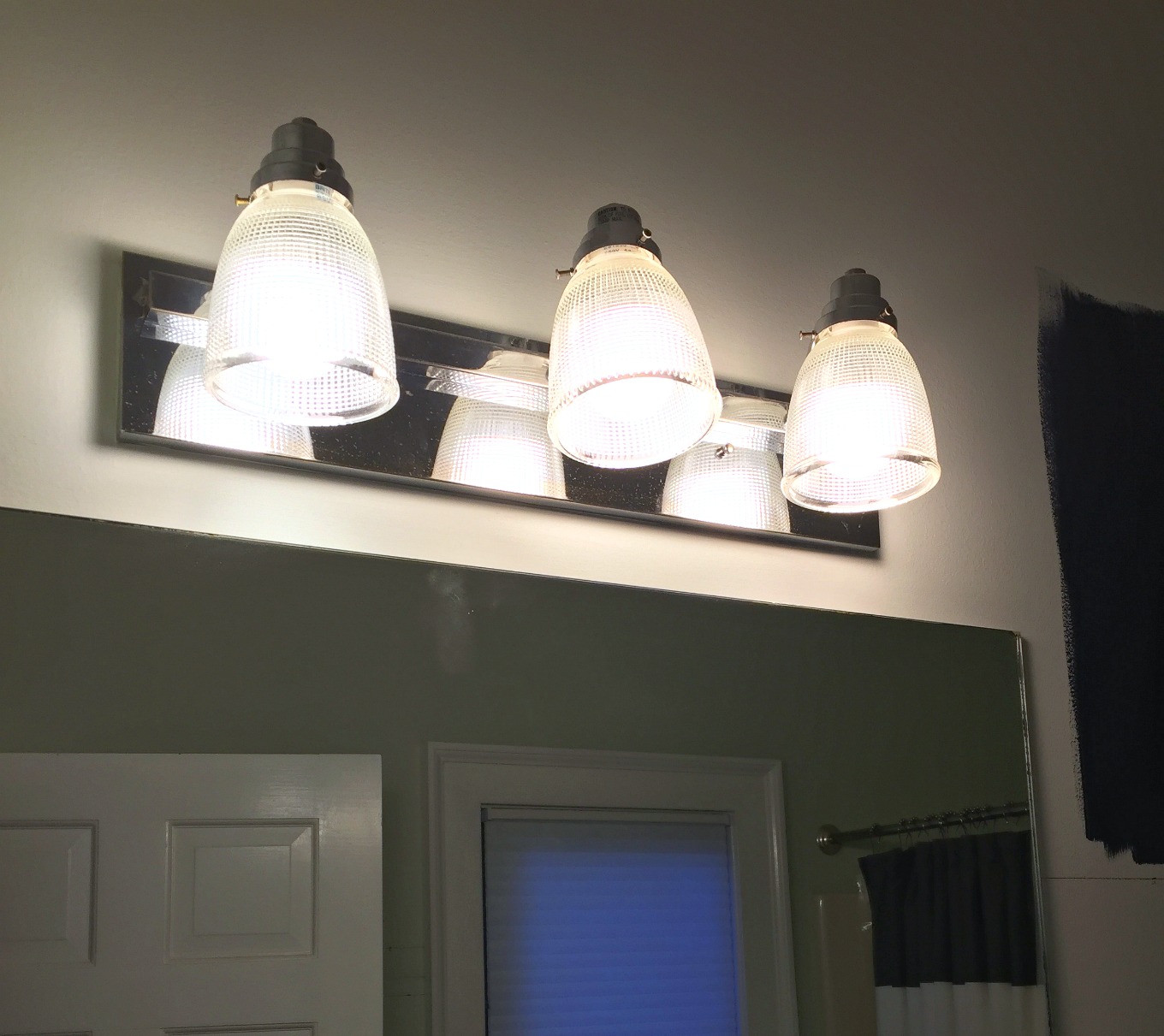 And, now, the bathroom is finally, finally finished! 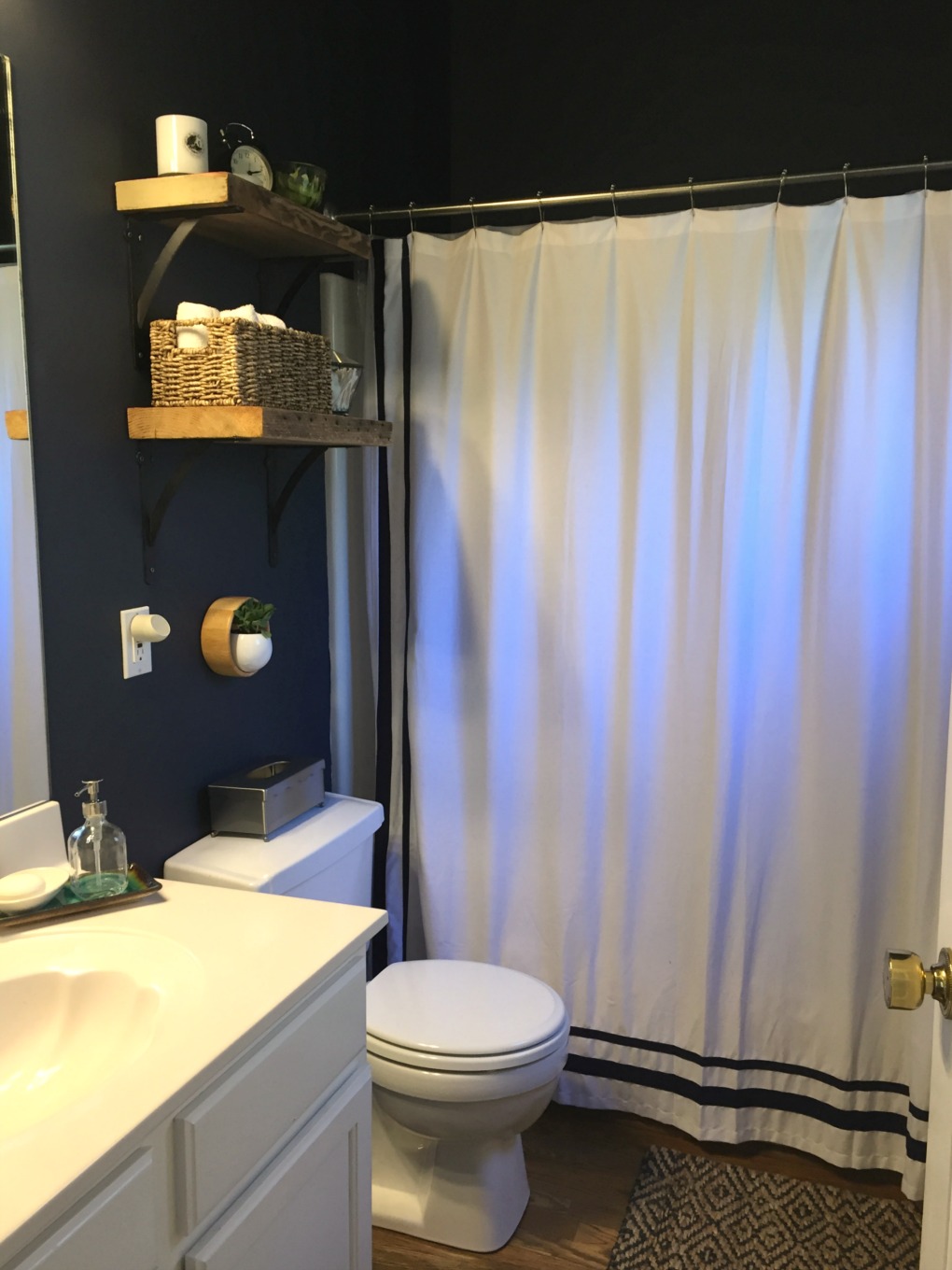 I have a lot to tell you about this makeover… 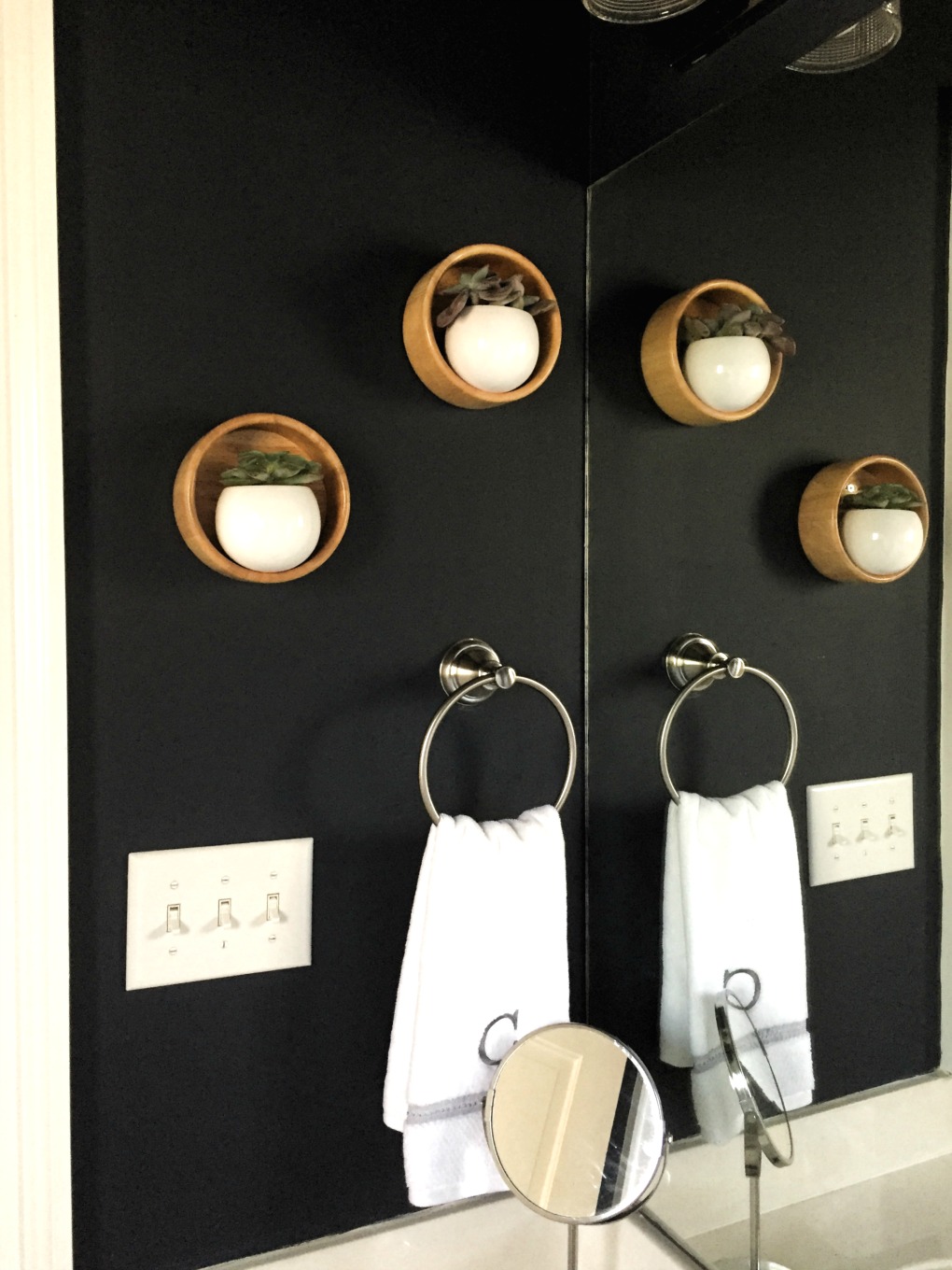 Those wooden wall planters were so easy to make! Click here for the tutorial! 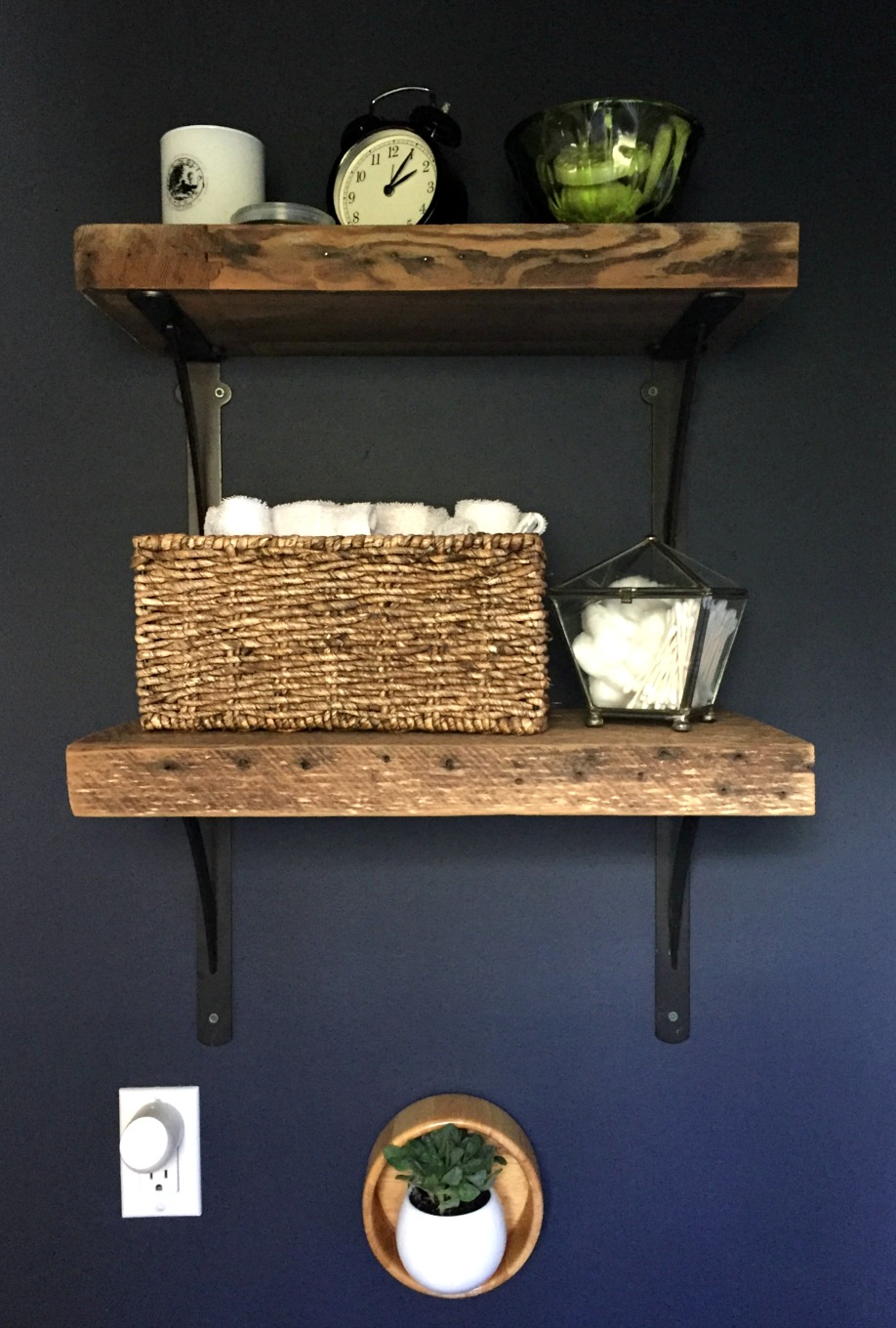 I’m going to show you on Thursday how I made these shelves out of reclaimed wood. Hint: it has something to do with my daybed!

If you can’t wait, check out the tutorial on how I made the reclaimed wood shelves here!

But for now, I’m just going to show you the pretty pictures and tell you about my decision-making process. 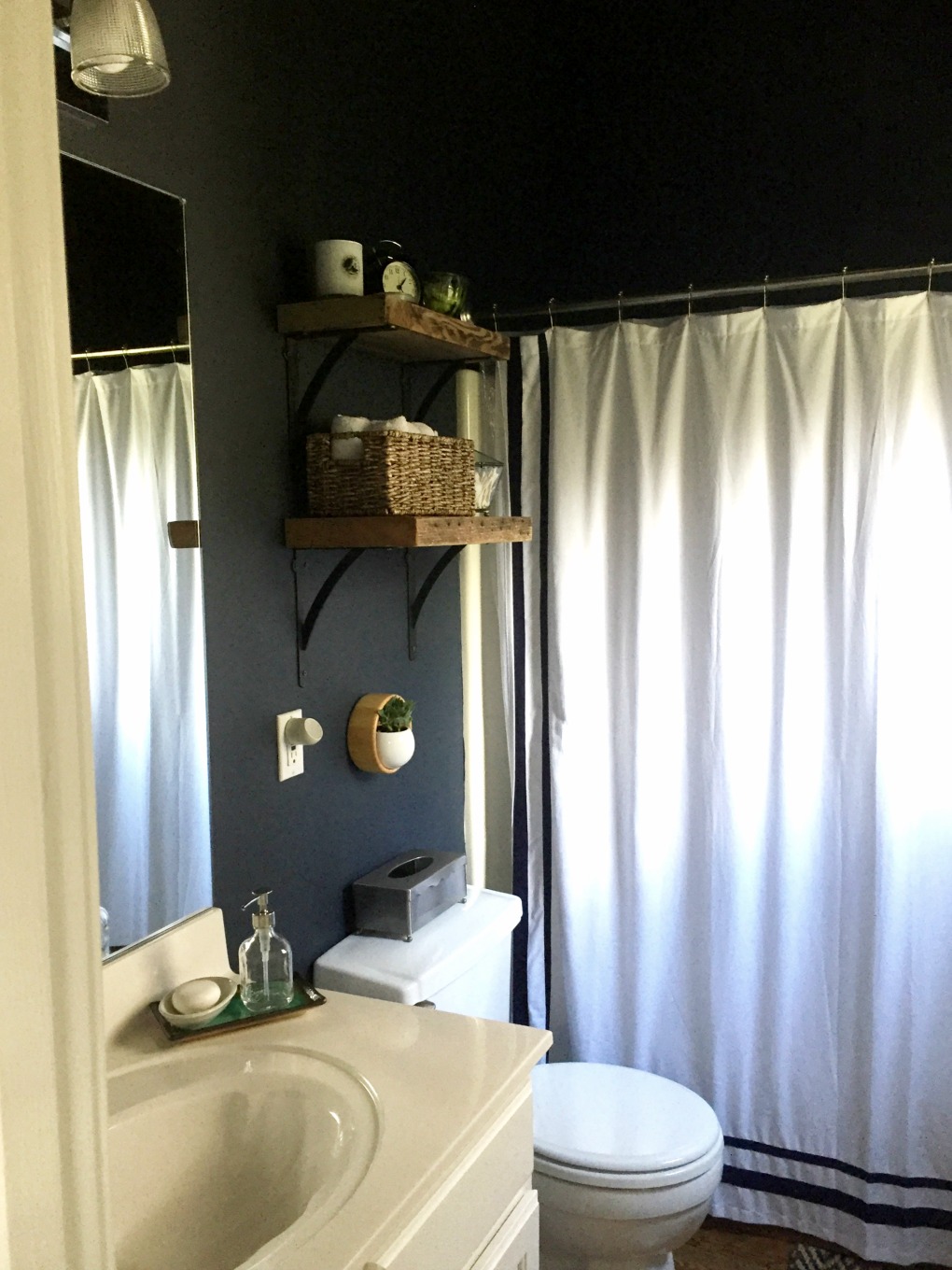 For example, several of you – including some people related to me! – told me to paint just the walls and not the ceiling. As you can see… 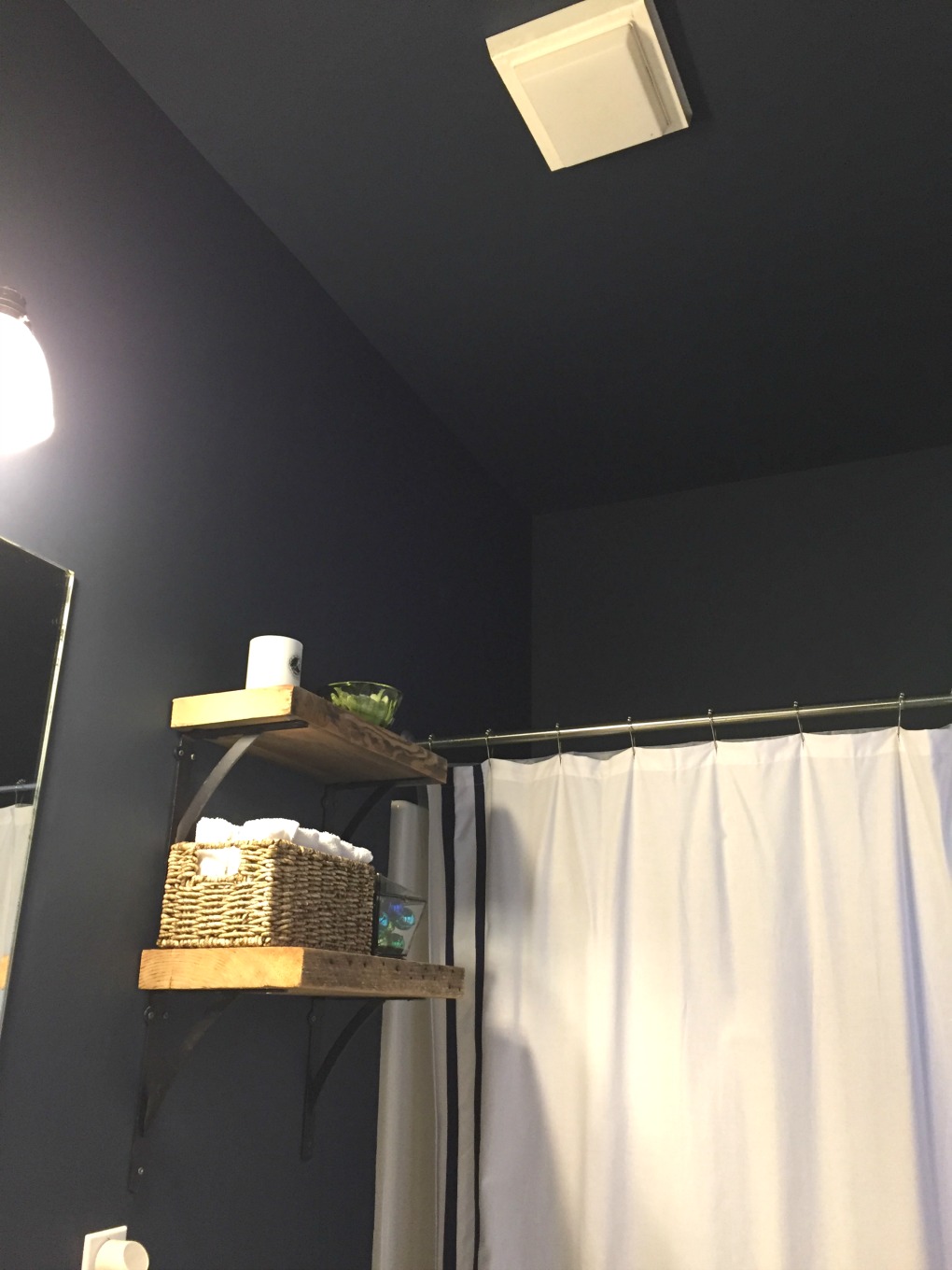 I didn’t listen. And I’m glad I didn’t. I think everyone who said I should leave the ceiling white thought that a navy blue ceiling would make the room seem smaller. It actually has the opposite effect, though – it makes the room feel like it goes on forever. The dark color on the walls and ceiling makes them just recede into the background. 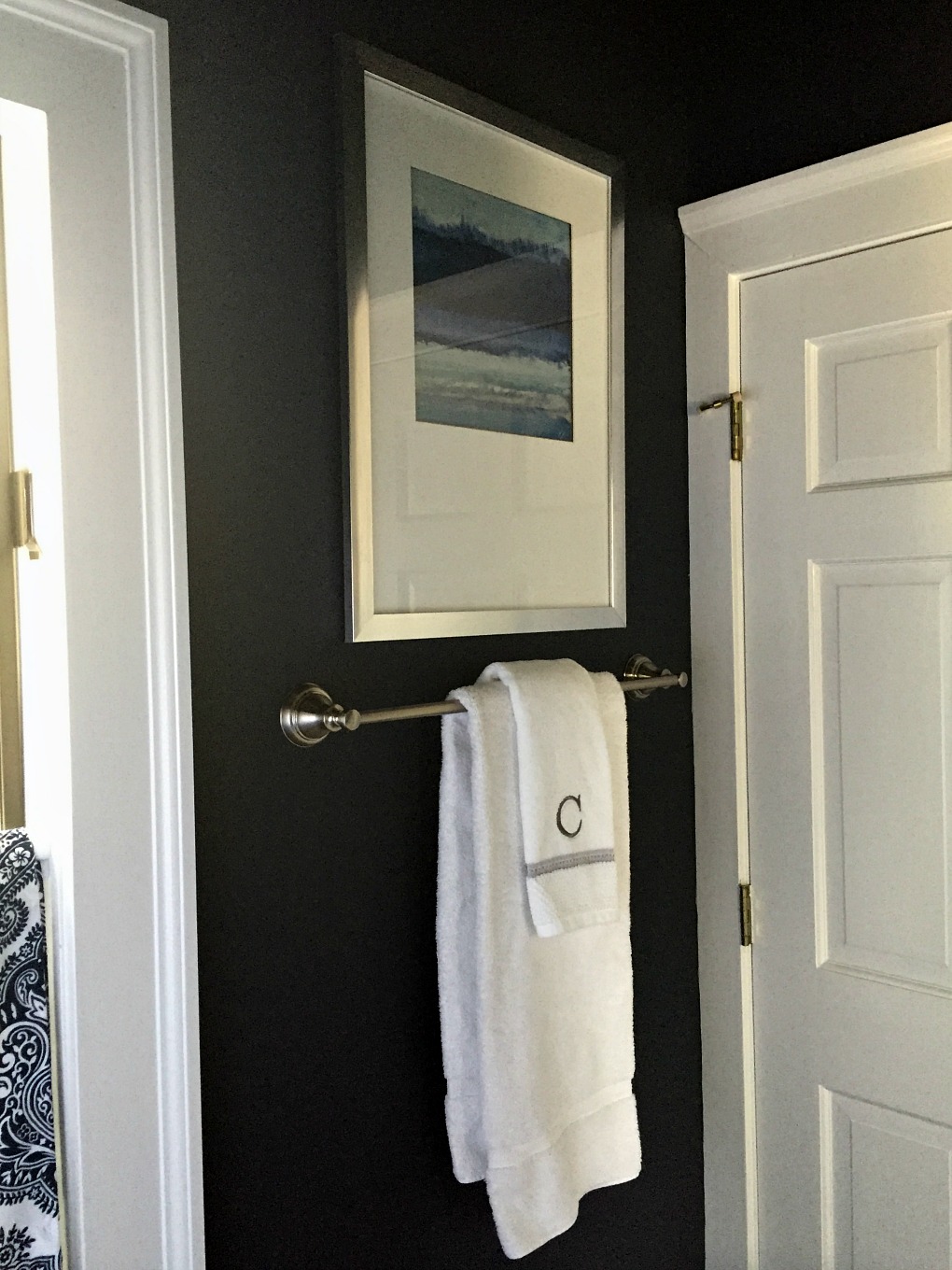 Also, as you can see, there’s no wainscoting. In this post about five changes to the guest bathroom, I talked about how I was going to paint the walls navy, but then add white wainscoting to break up the dark color.

I put one piece of the white wainscoting up on the wall and immediately knew it wasn’t what I wanted. It felt bulky and clunky and made the room feel smaller. I liked the expansiveness of the navy – so I just left the walls navy. The white trim, the white vanity, the white tub and shower curtain, and the white toilet would set off the navy just fine. 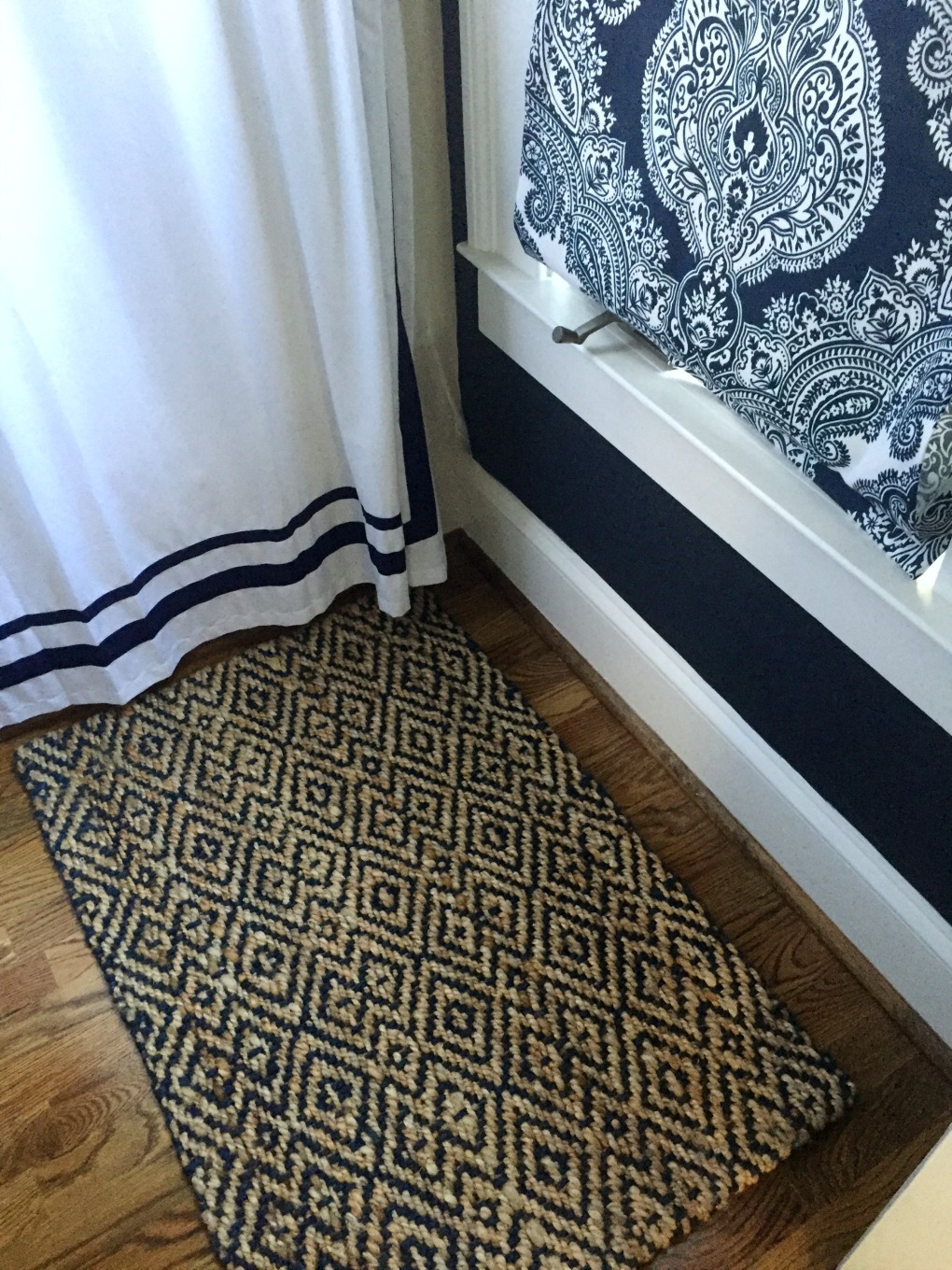 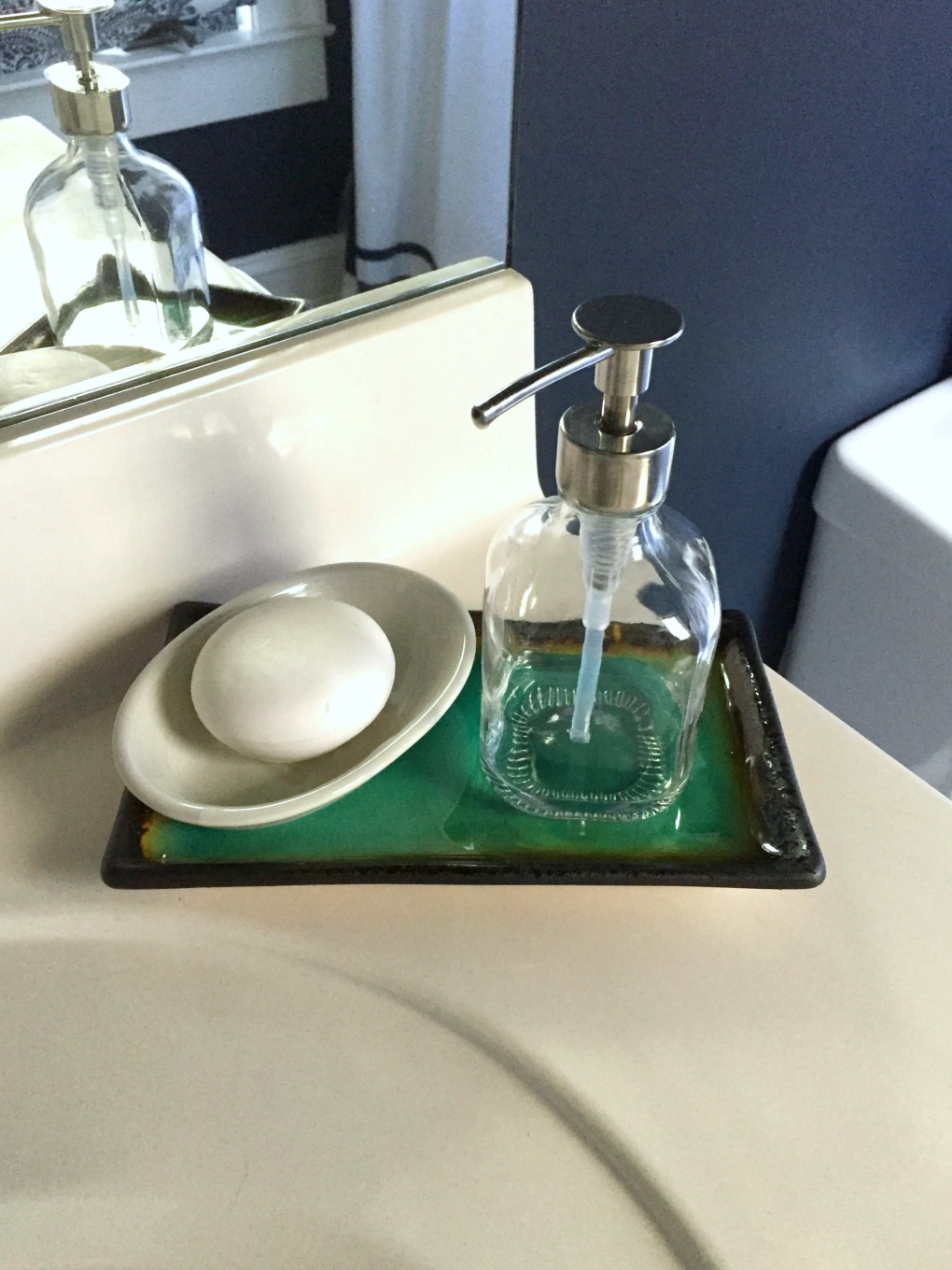 I found this little tray at the thrift store for $1. The soap dispenser is from IKEA. 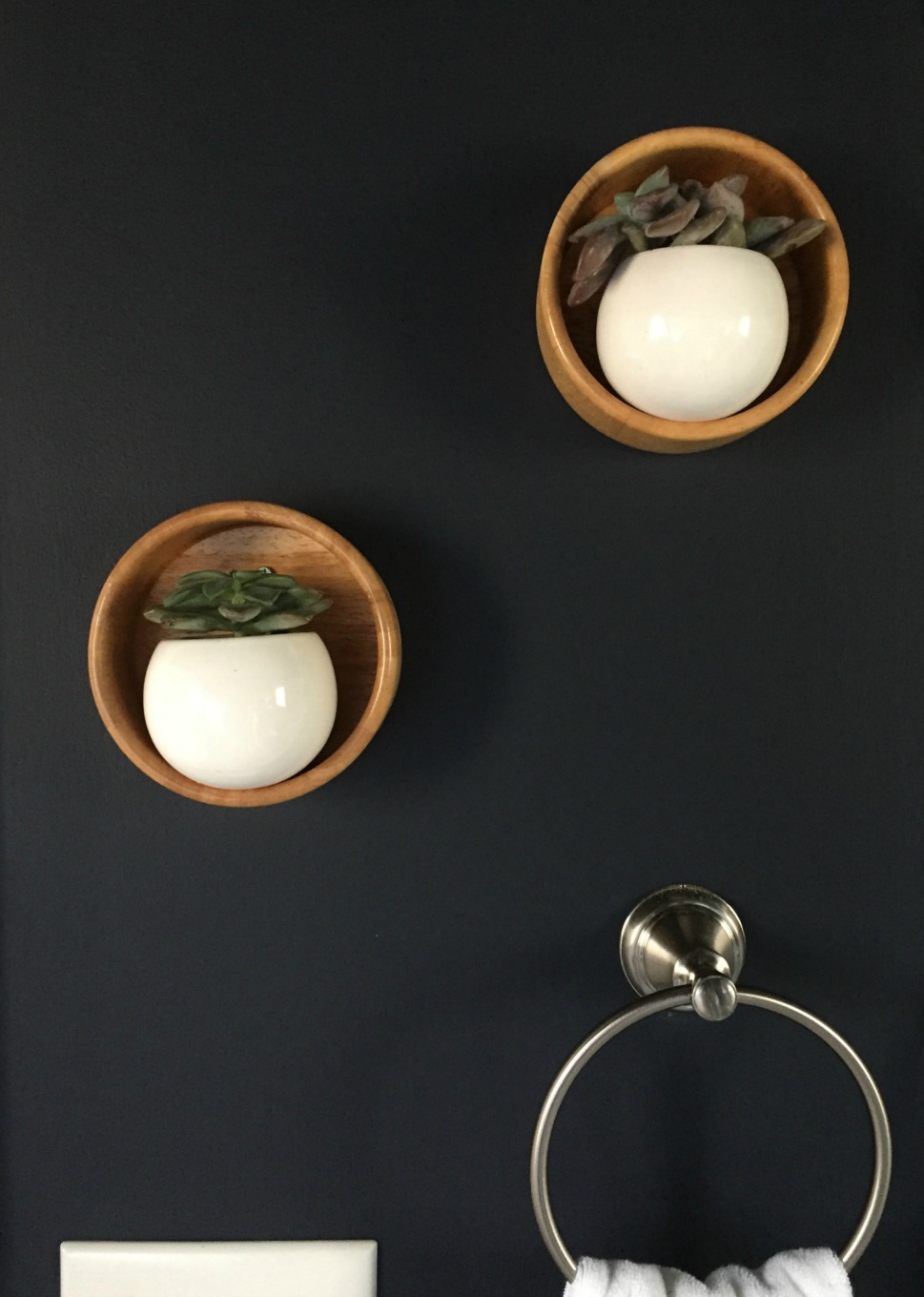 Can you tell what these planters are made from? I can’t wait to show you how easy they are to make! 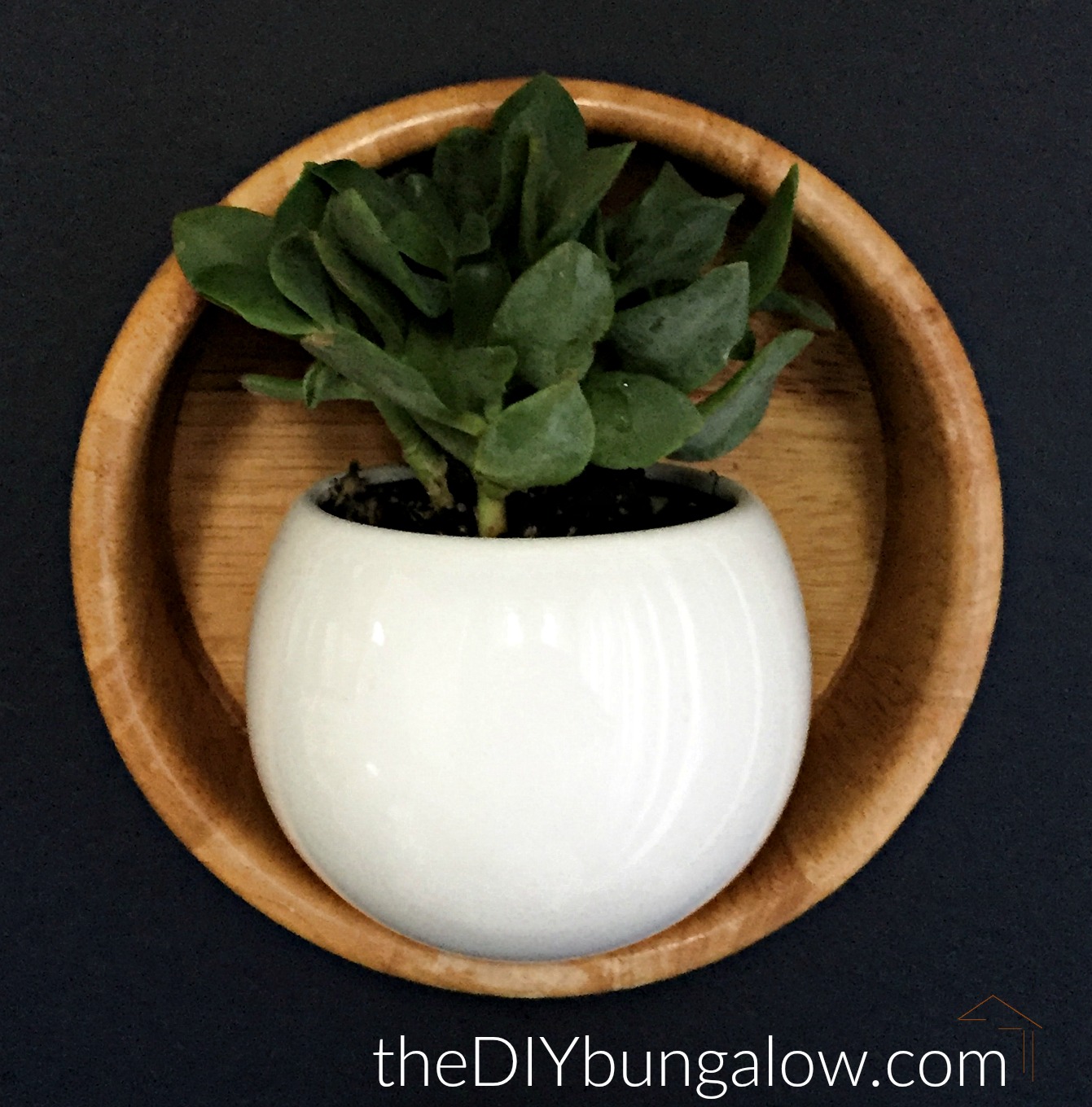 Click on the photo or the link below to find the tutorial for how to make these easy DIY wooden wall planters!

You can find the tutorial for the DIY wooden wall planters here!

I’m really happy with how the bathroom turned out. I’m just bummed that it’s the guest bathroom and not my bathroom!

Here’s the full list of the materials used in this bathroom makeover: 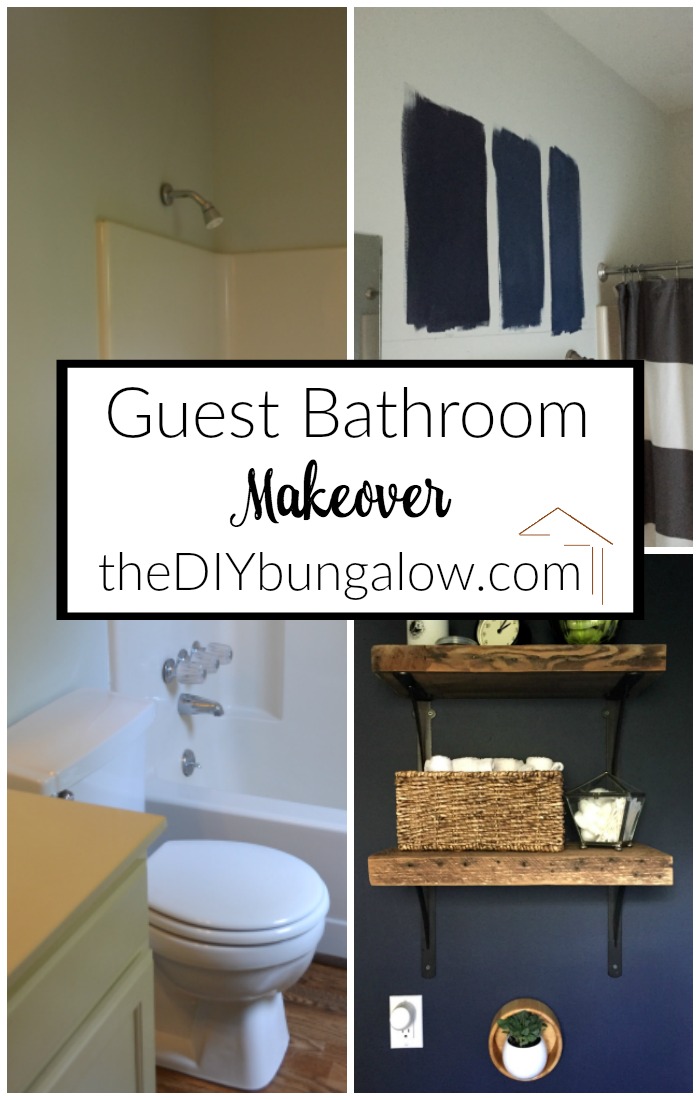