You are here: Home / Organizing / How to Organize an Unfinished Basement

Just to show you the mess that was, here’s video evidence of the “before”:

I know what you’re thinking: “Yikes.” ‘Cuz that’s what I was thinking.

The thing is: our attic is great, but it has pull-down ladder-type stairs. That makes it hard to put heavy things in the attic. Also, it means pulling down the door, pulling down the ladder, and having a spotter to put anything in storage up there. In contrast, the basement has actual stairs, and all you have to do to go down there is open a door.

And that’s probably why the basement ended up a mess. We just kept putting stuff down there until we ran out of space. It needed a good organizing!

So, one rainy day, I decided to tackle organizing the basement. I used my favorite tip for organizing: breaking the space into zones. I broke the kitchen into cooking zones here and organized the pantry in our old house into zones, too, here. It made sense to do it down in the basement, too. I knew I needed room for the following stuff:

I bought some shelving units to organize the stuff, put the shelves together, and got to work. I can’t believe how much more space we have, now that all the stuff in there is organized! Check it out: 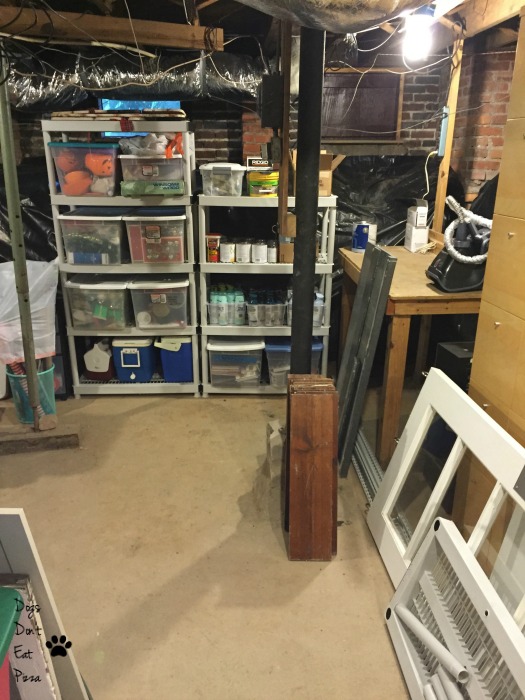 You can actually see the floor! (Not sure if that’s a good thing, but there it is.)

Using “zones,” I worked my way around the room, deciding what would go where based on where I might use the materials and, honestly, how much things weighed (more on that in a sec…).

I knew that I’d want the paint and other DIY materials near the work table, where I might use it. So, that’s where I started. 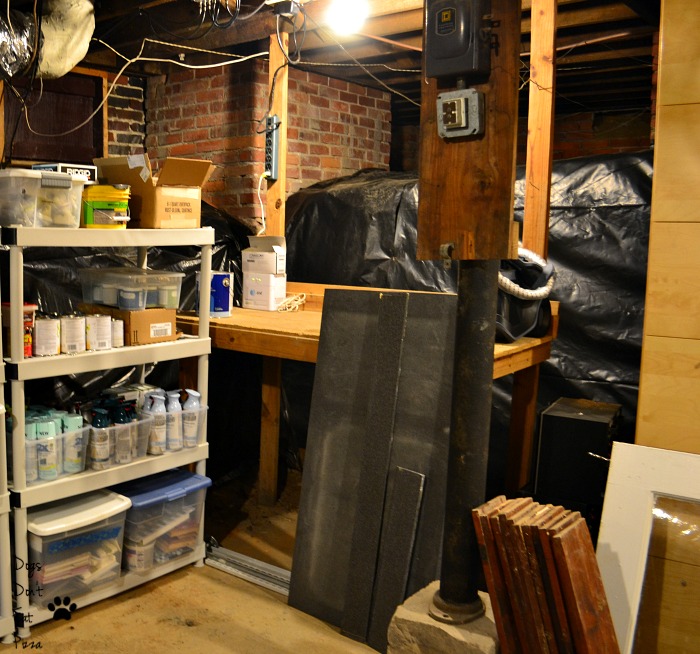 There’s the work table. Always good to start with what you know you need. I put the paint and related stuff (wood filler, spackling) next to the work table. 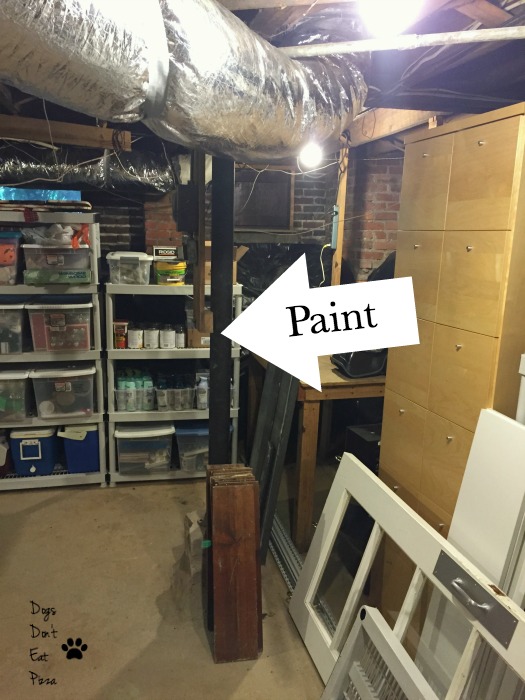 I put the heaviest stuff on the bottom shelf; here, that’s tile and grout. Then the next two shelves up have paint, and the top shelf has a container of extra parts, plus more paint and other stuff.

I also wanted to keep the holiday stuff together, and knew that the biggest area that was open – in which to put the artificial Christmas tree – was near the paint shelves. So, I put the next shelf unit next to the paint and put the holiday buckets o’ stuff there. 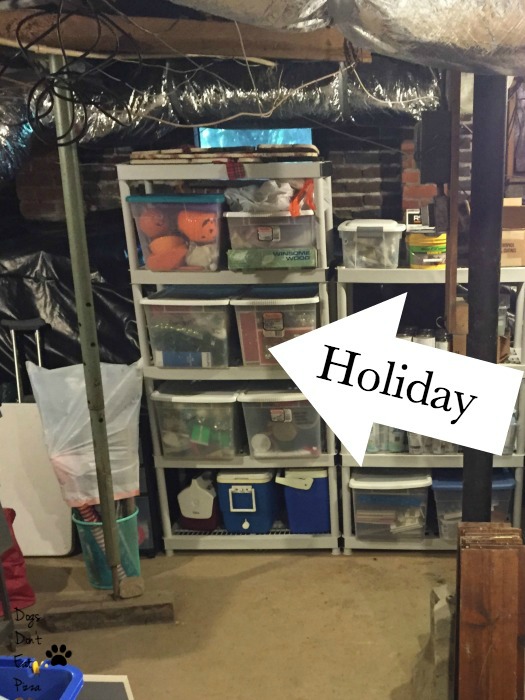 The red thing to the left of the pole there is the tree. I didn’t photograph it because, well, it isn’t much to look at in the red storage bag.

I put the heavy stuff near the stairs.

The magazines are in those plastic bins, and the kitchen cabinets are next to them. Why did I put this stuff by the stairs? First, these things are HEAVY. If I needed to lug any of these things upstairs, it’d be the shortest trip with this heavy stuff! Second, since Dear Husband gets a new Rolling Stone each month, it made sense to put the storage of those magazines near the stairs, so that he’s more likely to just run down the stairs and put the latest issue in the bin. 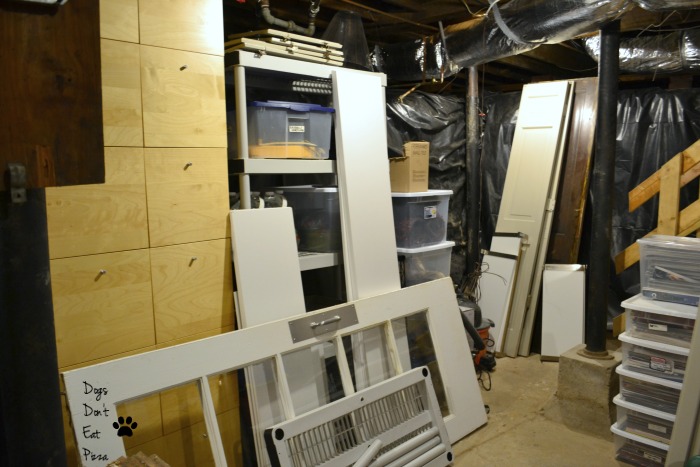 Yes, that’s the sliding door from the kitchen pantry. I removed it when I painted the kitchen’s walls and trim. Not sure if it’s going back; I kind of like not having a door there.

Doors and shelves are also heavy, so they went between the workbench, where I might use them, and the stairs. 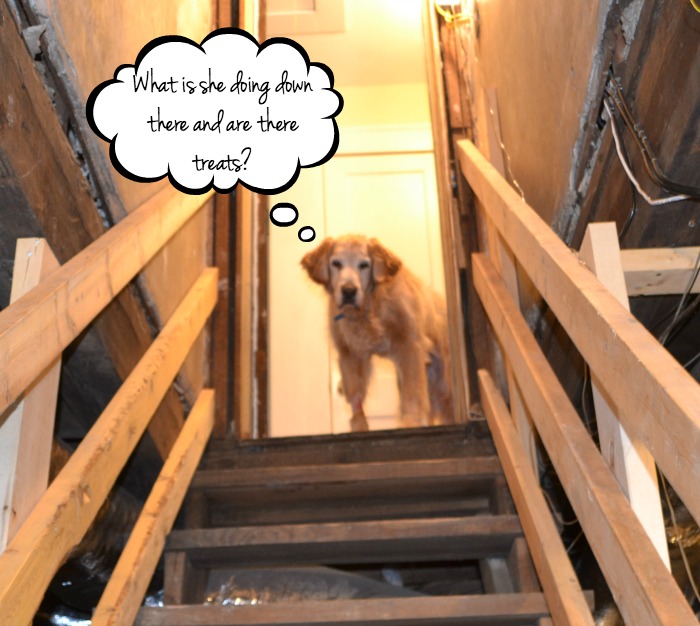 My trusted helper, waiting for me at the top of the stairs. (I don’t allow him in the basement.)

Not only is the basement more organized now, but it’s much less scary.

So, how do you organize an unfinished basement?

What area of your home needs organizing? Share in the comments below. 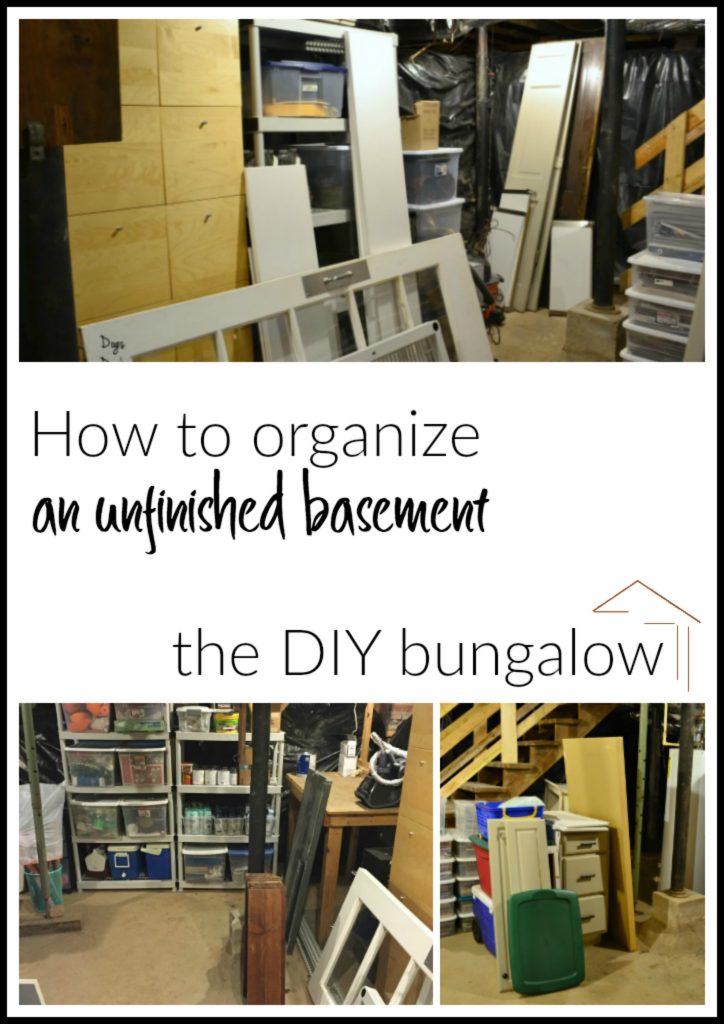 « How to Prepare Walls for Painting
Farmhouse Style Herb Garden »