Before you get any crazy ideas about what “My Daughter’s Room 2.0” means, no, I didn’t paint it again.  Just wanted to get that out of the way. (Whew.)

Here’s a picture of my daughter’s room as of 9:00 this morning: 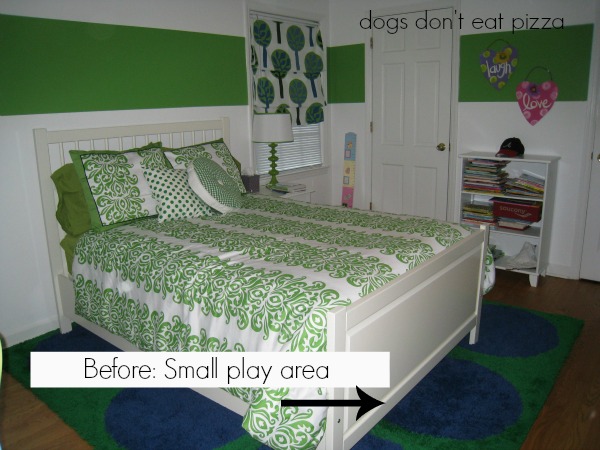 She loved it, but hated that she didn’t have enough space to play. She has a much smaller room than her brother does, and she periodically reminds me of that fact. Also, she has started playing more with Legos and other types of toys that require spreading out a bit. She had no place to spread out.

Time to re-imagine her room…how could I give her more space without adding a new wing to our home?

This picture shows the same view of her room – from her doorway – as the picture above, but as I rearranged it today (and with a much better camera): 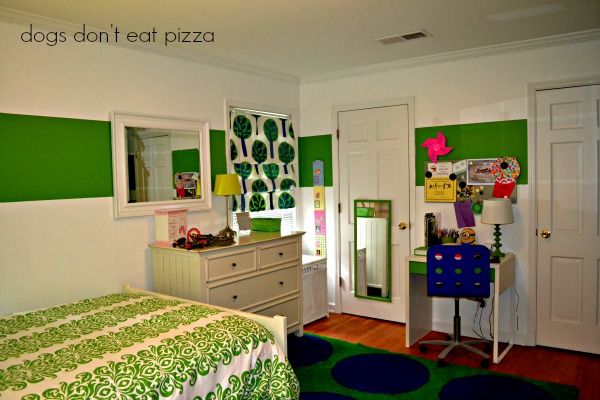 Now she has plenty of play space in the middle of the room. 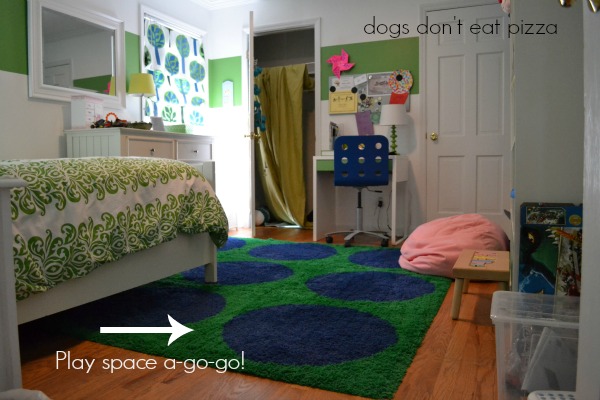 By moving the bed against the wall and to the corner, it opens up the floor for her play space. 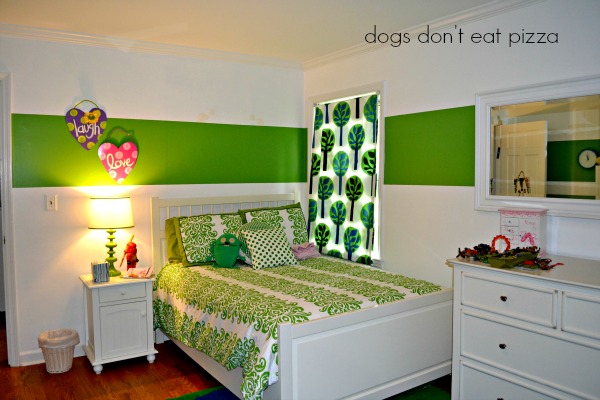 The doorway is to the left of the nightstand.

Let me walk you around the rearranged room, starting from the doorway: 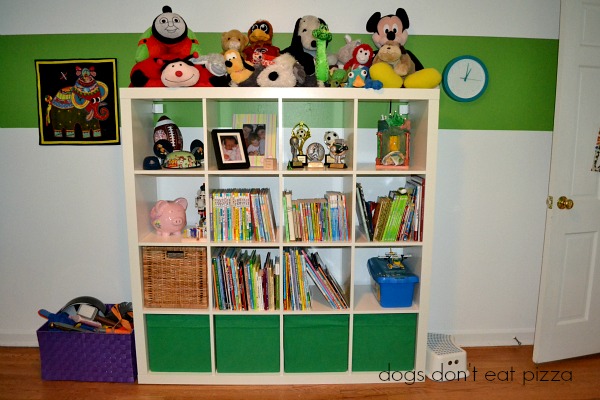 When you walk in the door, the Expedit is right in front of you. We actually have the Expedit to thank for this furniture-moving-around experiment. We got this for M a few months ago. Before that, I could not have rearranged her room this way, because we had two smaller shelving units: 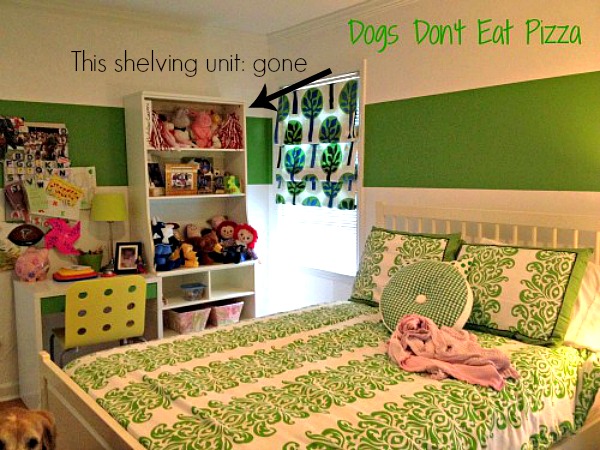 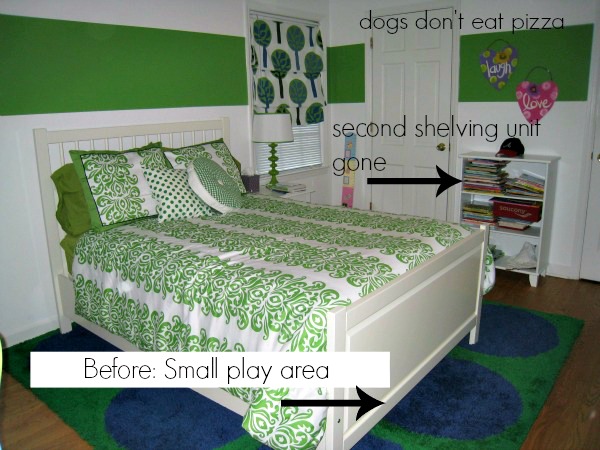 Those two smaller bookcases didn’t hold as much as the Expedit and, as you can see, the shelves were oddly sized, so her books and stuff didn’t fit well on them.  We donated them to a worthy cause and replaced them with the Expedit. Great decision. 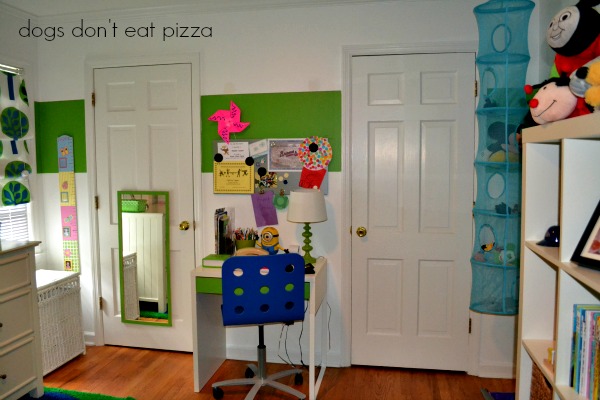 Her desk, between her closets. Note that she has a minion. Hee hee. 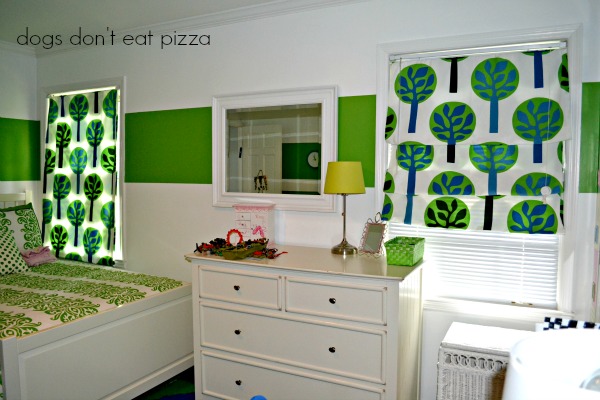 Dresser side. I let one of the faux Roman shades down (by her bed) because I removed the mini-blinds from that window. I didn’t want that string in the mini-blinds next to her bed. The shade should still keep the sunlight out.

And that’s how I rearranged my daughter’s room to give her a play area. I can’t believe how much bigger her room looks now. She’s thrilled.

Oh, if you promise not to tell her, I’ll let you in on a little secret I found: 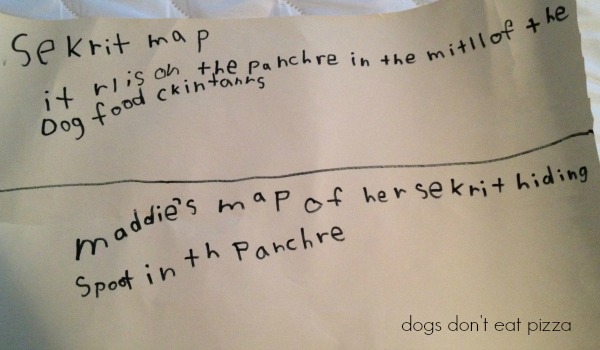 Translation: Secret Map – it relies (?) on the pantry in the middle of the dog food containers.

I found the map to the secret hiding place in the pantry (“panchre”)! Shhh! Don’t tell her I found it (I put it back where I found it today)!

« Defy Definition: Finding Your Design Style
If you give Karen a Magic Eraser, she’ll paint the bathroom to go with it. »