Want a great way to store toys (or other stuff) behind closed doors? How about repurposing old lockers for storage?

I have wanted some old school lockers for a while. So imagine my excitement when I found these lockers at the Atlanta Habitat for Humanity ReStore:

Banged up and dark…not what I was going for. But I could see the potential. And for only $149, I couldn’t resist! (Check e-bay or Craig’s List – these kinds of lockers can go for up to $800!)

I brought them home (which was an adventure) and cleaned them off. 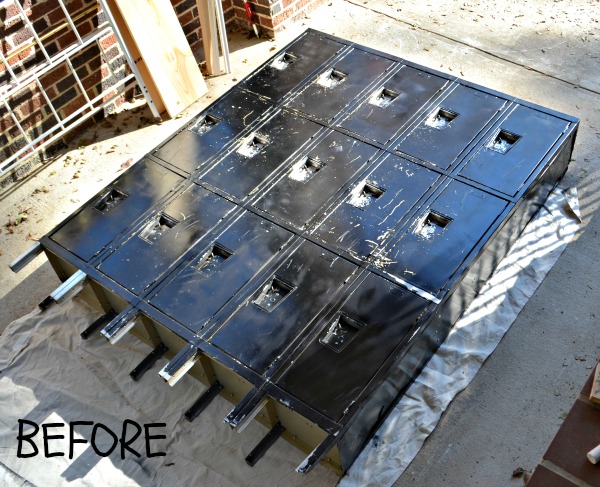 I decided to paint each level of lockers a different color. Of course, painting the whole thing one color would have been much easier but, since I knew I was going to use this for toy storage, I wanted it to be colorful.

To paint each level a different color, tape off the first level with painters’ tape, covering the rest of the lockers with a plastic drop-cloth. 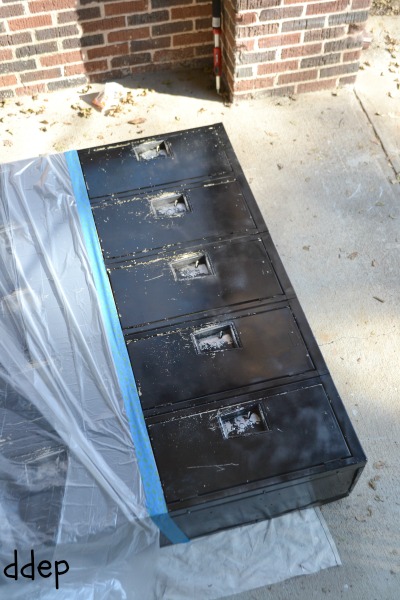 I used Rust-Oleum Ultra Cover 2X spray paint in a gloss finish. This is not a sponsored post – it’s just that Rust-Oleum is simply the best spray paint you can buy and I only use Rust-Oleum for that reason.

For the top level, I used two coats of Rust-Oleum Ultra Cover 2X in Warm Yellow, gloss finish. I only had to use two coats on this level because of the lighter yellow covering the darker existing black paint. For all of the other levels, only one coat was needed.

I painted the second level in Key Lime, gloss finish. I taped off the top level and bottom level to paint the middle one. 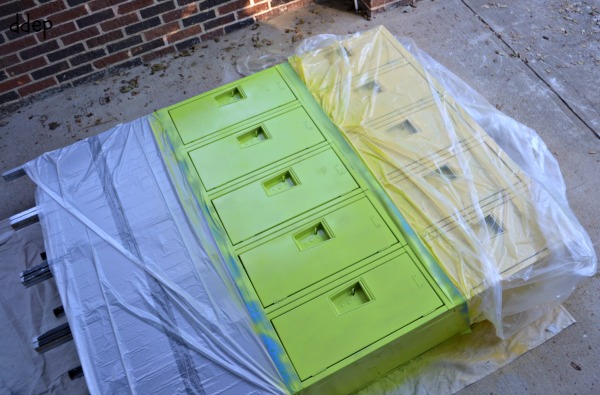 The bottom level is Seaside in gloss finish. 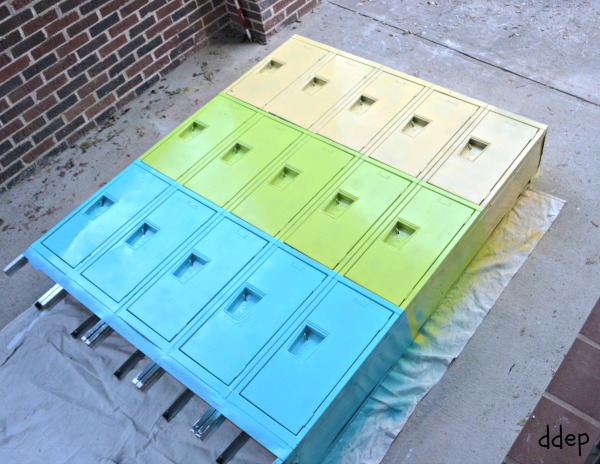 To get the lockers in the house, we had to take them apart. They were bolted together with screws and nuts, and the screws were little. To make putting them back together easier, I bought longer screws – that made it much, much, much easier to bolt back together.

Here’s the “after” – the finished lockers in place! 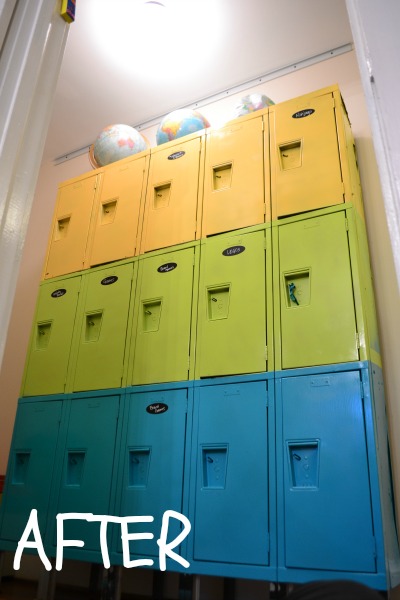 As you might imagine, the lockers didn’t fit flush against the wall, both because they are old and a little warped, and because there is baseboard on this wall. To make sure the lockers stayed put, I added a cleat to the wall and screwed the lockers to the cleat. Now these babies aren’t going anywhere.

I added chalkboard labels to the doors. 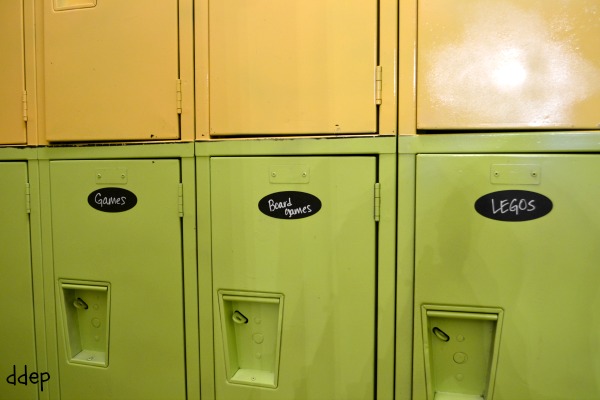 I like using chalkboard labels because they can be erased if we change what’s in a particular locker. 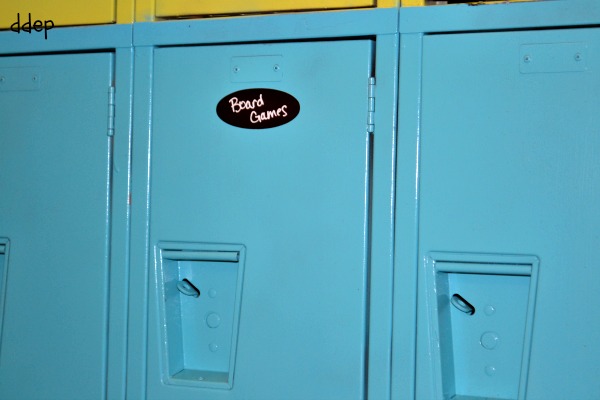 I did leave some graffiti I found inside one door: 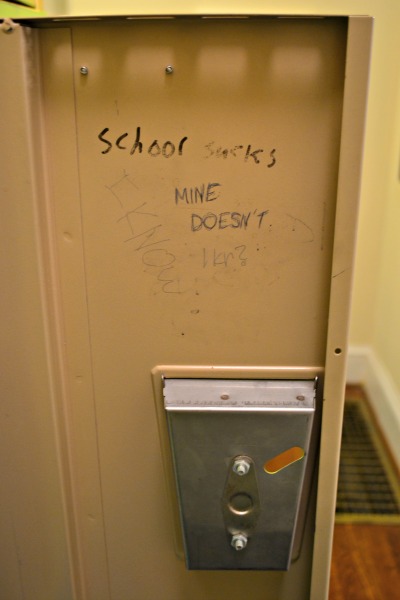 Board games go on their side and fit fine. I just put a rubber band around each box to keep any pieces from falling out. 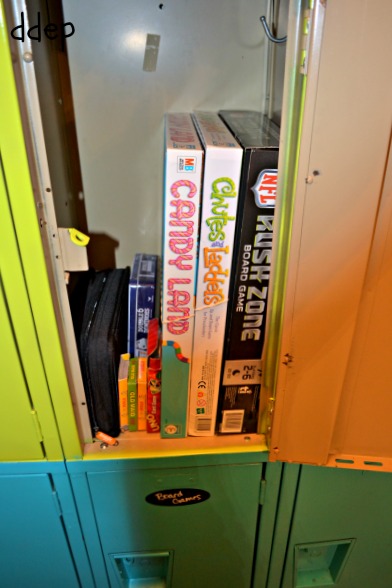 I put my globe collection on top. Lockers, globes, and the old schoolhouse light fixture – all remind me of my school days. 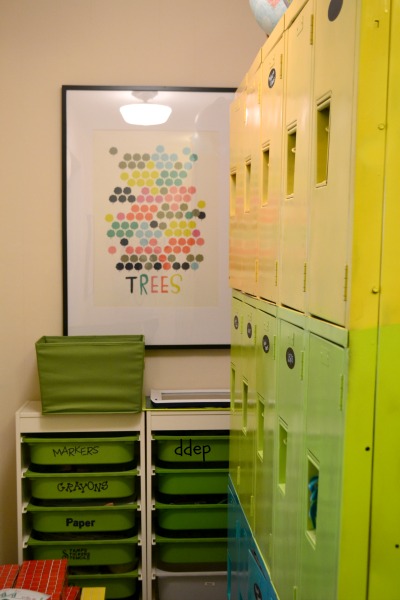 My kids love their new toy storage. They love how everything has a place and is labeled, and it’s unlike anyone else’s toy storage! The art supplies are to the left of the lockers.

I love this project because it’s colorful, it repurposes something old, and it keeps the toys organized!

This site uses cookies; continuing means you're cool with that. Find out more here.