You are here: Home / Paint and Color / How to Stencil an Accent Wall

FYI: I was provided a stencil and brush for this product review, but all opinions are 100% honest and my own.

As a DIYer, I can do many things. I can paint, I can clear a clogged toilet, I can use power tools.

There are two things that stump me: hanging curtain rods and stenciling.

Leaving aside the curtain rod problem for now (that’s another story for another day), I decided to tackle using a stencil.

It’s not that I don’t like a good stencil. It’s that, for some reason, stenciling and I just don’t get along. I don’t know why – too much paint on the brush? The wrong stencil? Impatience? (Scratches head…)

So when Royal Design Studio contacted me and asked me to review a stencil, I had two options: (1) run, cowering in fear, or (2) face this challenge head-on, ready to rumble with my worthy stencil opponent. I chose #2. Game on!

I chose a large stencil – the large Curved Connection Moroccan Stencil – figuring it would be easy to maneuver. Royal Design Studio also sent me a stencil brush. The stencil comes with detailed instructions, as well as links to the website which has great instructional videos. 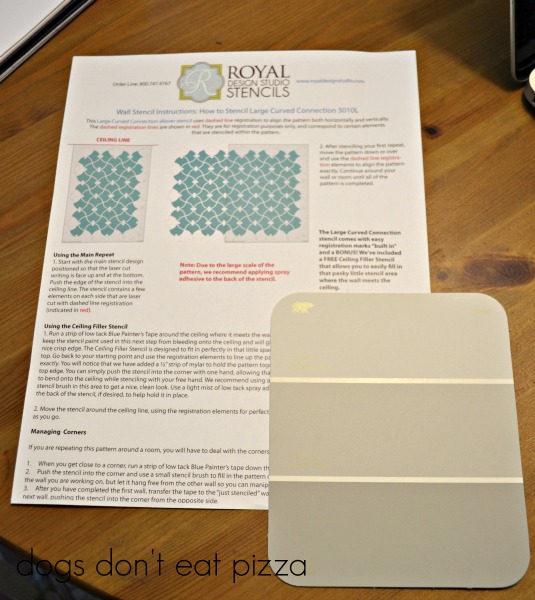 I had the paint – I decided to stencil in the guest room which now has become the master bedroom. The base coat is “Gentle Rain” by Behr (the one in the middle of the paint chip above). I decided to paint stripes on top of that, for the background of the stencil, and that paint color is “Porpoise” by Behr. “Porpoise” is one shade darker than “Gentle Rain” on the paint chip, and I used an eggshell finish for both. 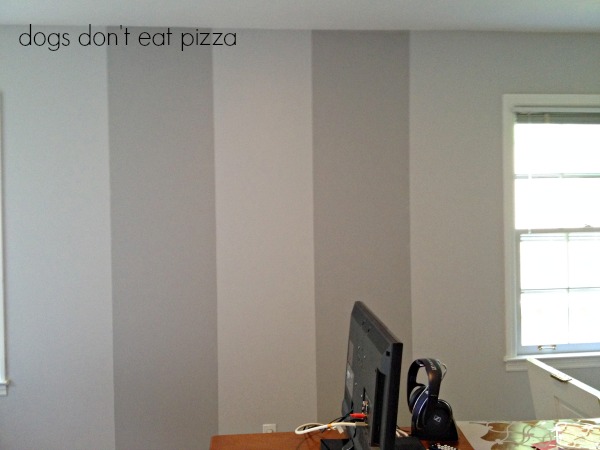 Stripes on the wall, pre-stencil.

I also used a small foam roller to paint the stencil. Because the stencil was large, I decided it might be easier to handle a roller for the main part of the stencil, using the brush around the edges and for touch-ups. I grabbed a paint tray and a paper towel and I was ready to go!

I used delicate-use painters tape to affix the stencil to the stripe on the wall. You can also spray a light coat of spray adhesive on the stencil, but I found that, for this limited area, the tape worked well.

The stencil came with the main stencil pattern and then a ceiling filler stencil, for filling in around the trim by the ceiling and floor.

I first taped the main stencil to the wall, with the top edge abutting the ceiling. I ran the tape along that edge so that it held the stencil right to the ceiling-wall line. 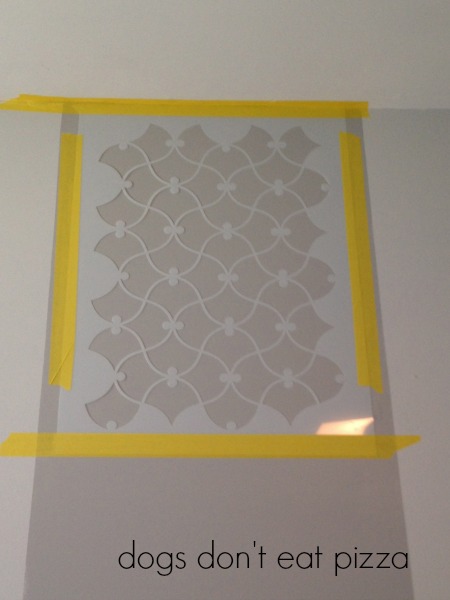 Then I started painting. I put paint on my roller – and keep in mind that less is more here. Do not overload the roller. Just add enough paint to wet the roller, then remove some of the paint by rolling it on the top of the roller tray. You can also blot it on a paper towel, if that’s easier. If you overload the roller (or brush) with paint, the paint will bleed under the stencil.

I then applied the paint with the roller, using nice, gentle, even pressure. Don’t press too hard, or you end up with lines in the paint.

After I finished the first panel, I removed the stencil and grabbed the ceiling filler stencil. I taped it to the ceiling and wall using the same delicate-use painters tape; for this, you definitely want to use painters tape because it will prevent paint from getting on the ceiling. It’s easy to know where to place it, because it fits right in the pattern left from the main stencil! You can see how it lines up in the picture below. Easy as pie. 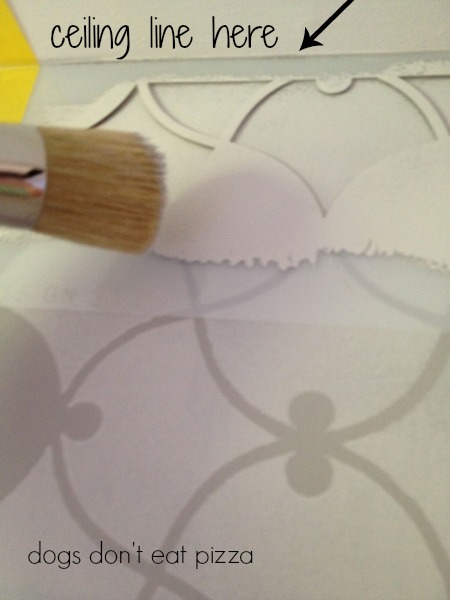 As you can see from the picture, I used the brush on the ceiling filler stencil because it was easier to maneuver near the ceiling line. I didn’t want to get paint on the ceiling and I had more control over that with the brush.

When using the brush, add a little paint to it and then blot it off on a paper towel.

Again, that ensures that you don’t have too much paint on your brush.

You can also use the brush to do touch-ups on the area done with the roller. 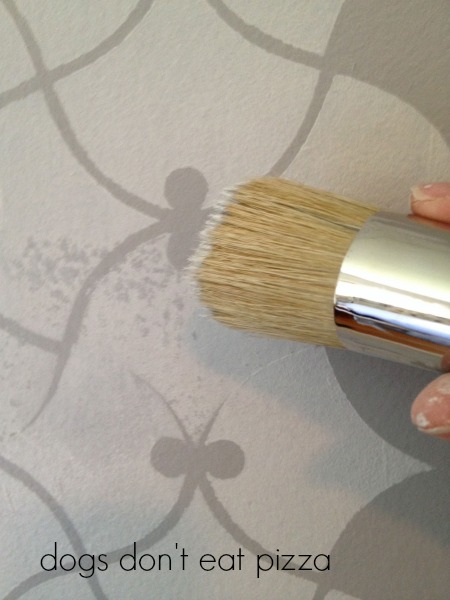 I then finished the rest of the stripe, moving the stencil down the stripe. Voila!

I did the same for the second stripe, then stood back and realized…I STENCILED!!!!!

And if I can stencil, anyone can!

Thanks to Royal Design Studio for challenging me on this stencil project!