You are here: Home / DIY / Swap It Like It’s Hot – Vintage Chalkboard and More

I am so excited to join the #SwapItLikeIt’sHot party! 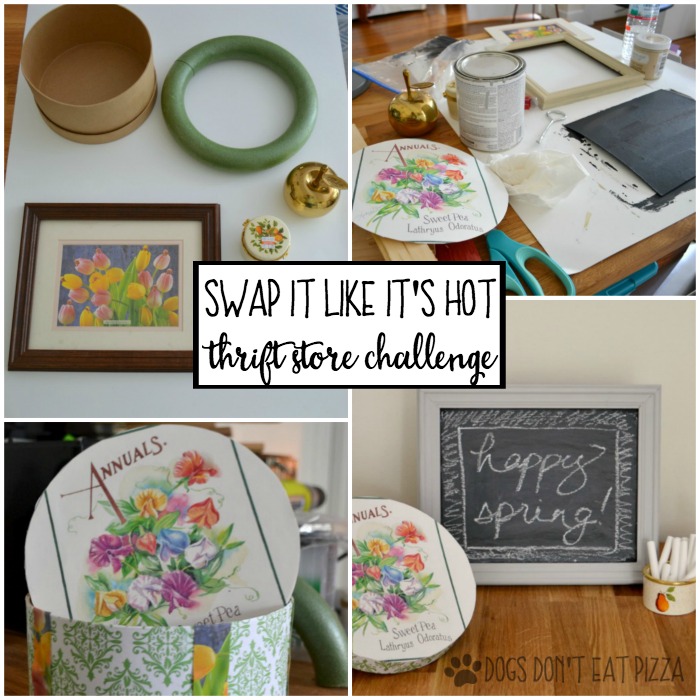 What is “Swap It Like It’s Hot”? It’s a group of 39 bloggers who have crazy, creative minds! We each go to a thrift store or yard sale and buy $10 (and no more than $10!) worth of stuff. Then we send that stuff to the next person on the list. And that person turns that stuff into something awesome!

Here’s what I got from Jessica at Gourley Girl and Guy: 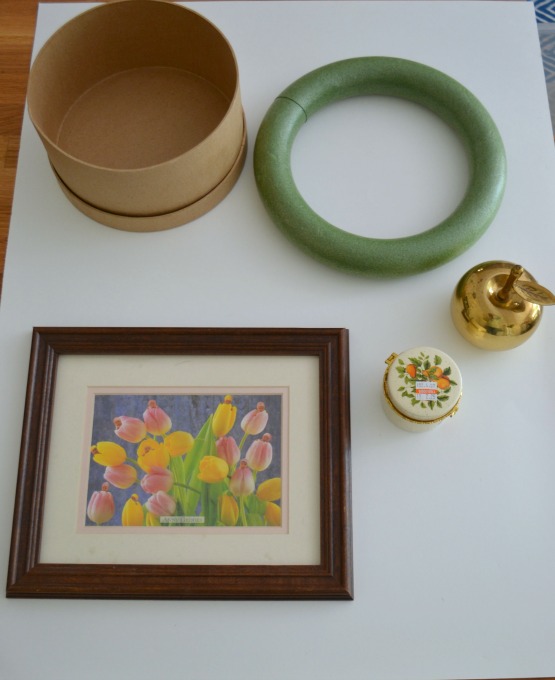 A cardboard hatbox, a wood picture frame with an Anne Geddes print in it, a ceramic jar, a brass apple, and a foam wreath form. Hmmmm…

At first, I was playing with the idea that the wreath form was about the same size as the cardboard box, but I couldn’t quite come up with what to do with that. Stumped.

Until one day, I was just driving along in my car and…inspiration struck! I knew exactly what I was going to do!

I started with the picture frame – turning it into a vintage-style chalkboard.

I flipped the frame over and found that the back was nailed into the frame. 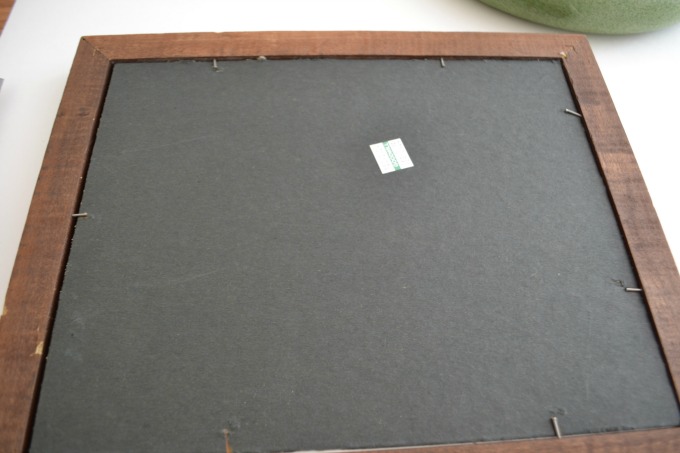 I removed the nails and the back and found this underneath: 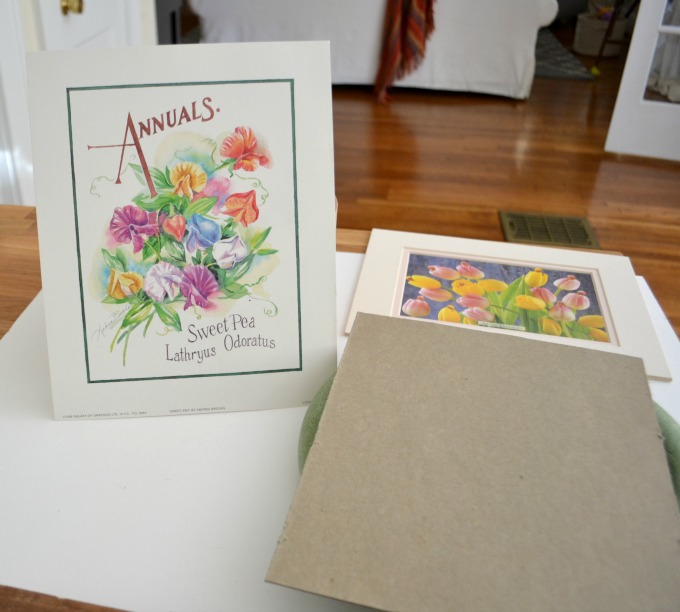 How cute is that little print that looks like a seed packet? I knew that was going to be part of the cardboard box’s transformation!

OK, back to the chalkboard.

I first painted the frame with an off-white chalky paint… 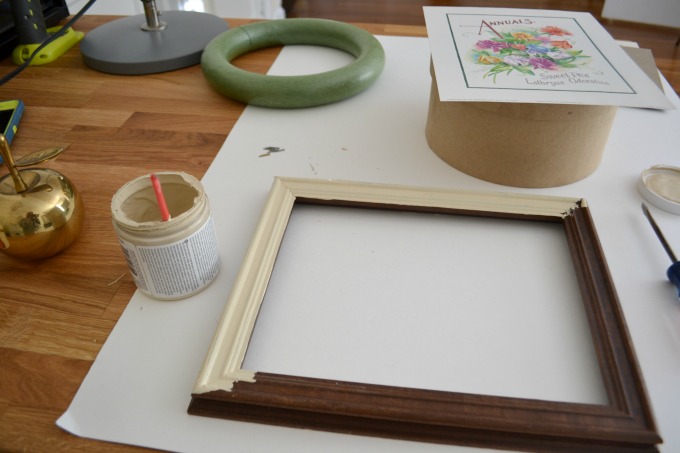 See? I’ve already got the seed packet print on the box top!

But I didn’t like the color – it was too brown.

I decided to try a gray chalky finish paint instead. Much better! 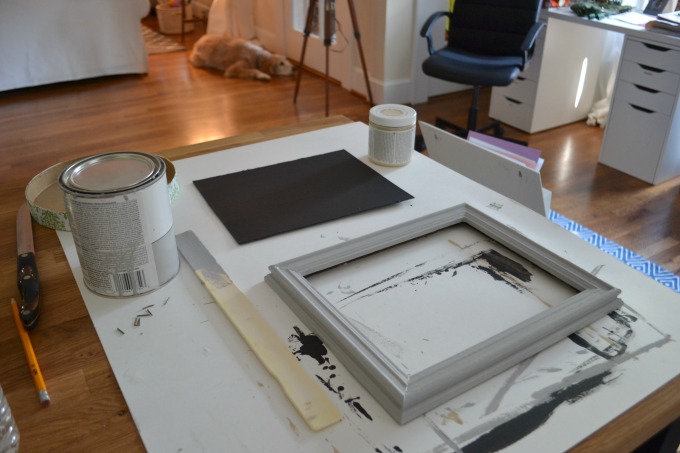 Anyone see Hank in this picture? He’s so sneaky!

(affiliate link) – it’s the best). It took two coats to cover and get a good chalkboardy surface. 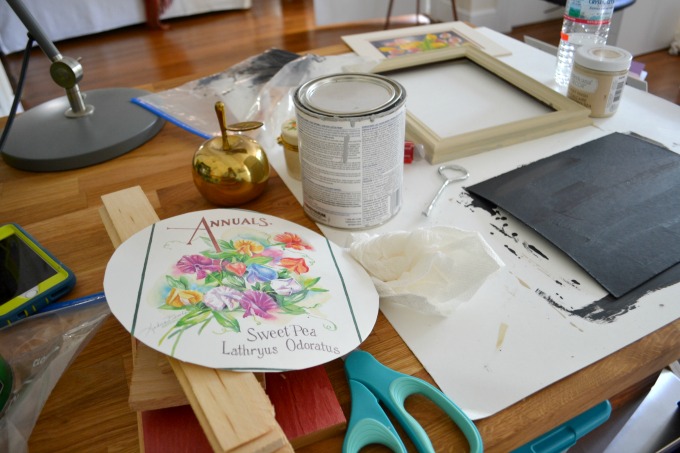 There’s a lot of creativity going on here.

I stapled the back to the frame – because the nails were tiny and too hard to replace, plus the staples provided more stability for writing on the chalkboard. 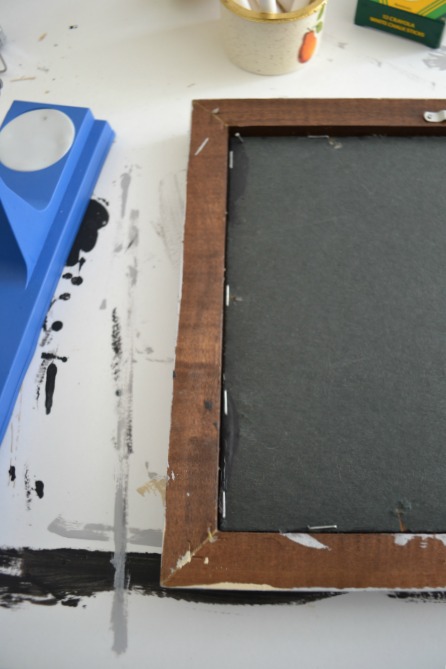 Now I needed a stand for the chalkboard, because this frame only had a hook for hanging it on a wall. Cue the wreath form! I cut it in half (I bet you were wondering why there’s a knife in the picture, above!) and hot glued it to the frame at a bit of an angle.

It’s the perfect stand for the frame (and I’m not really a wreath-loving kind of girl anyway). 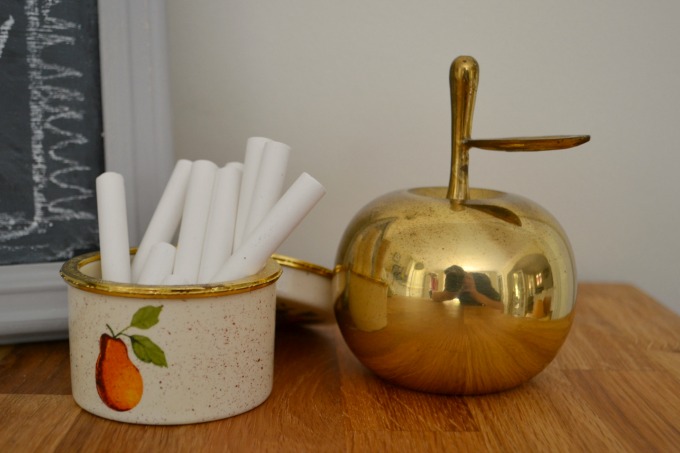 Nothing like finding your reflection in a shiny apple!

I couldn’t quite decide what to do with the apple, so I left it as is. I kind of like it that way anyway.

OK…time to work on the box. I found some scrapbook paper (from Michael’s, FYI) that went with the seed packet print, and I decoupaged that to the box’s sides with Mod Podge. I cut the Anne Geddes tulip print (being careful not to cut through the pictures of the babies – that kind of creeped me out!) into strips and Mod Podged them onto the sides in even intervals. Then I glued the seed packet print onto the top of the box (I traced the top and cut it to size first). 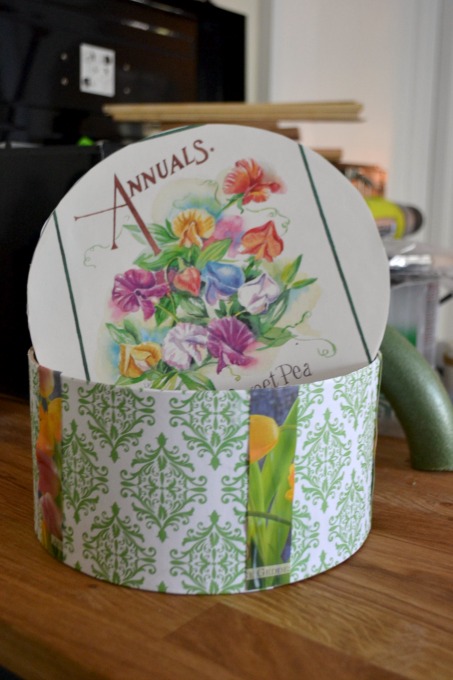 No babies in tulips were harmed in the making of this cute box!

So, here’s everything all finished: 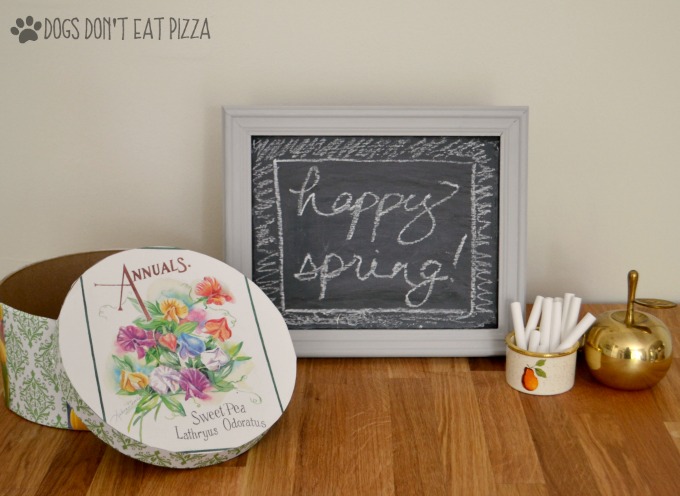 I’ve already moved the little chalkboard to the chest on our front porch, and the box is perfect for holding seed packets.

Wait til you see what I left on Dena from Hearts and Sharts‘ doorstep! See her transformation HERE.

Then follow the trail of thrift store goodies with the other participants: 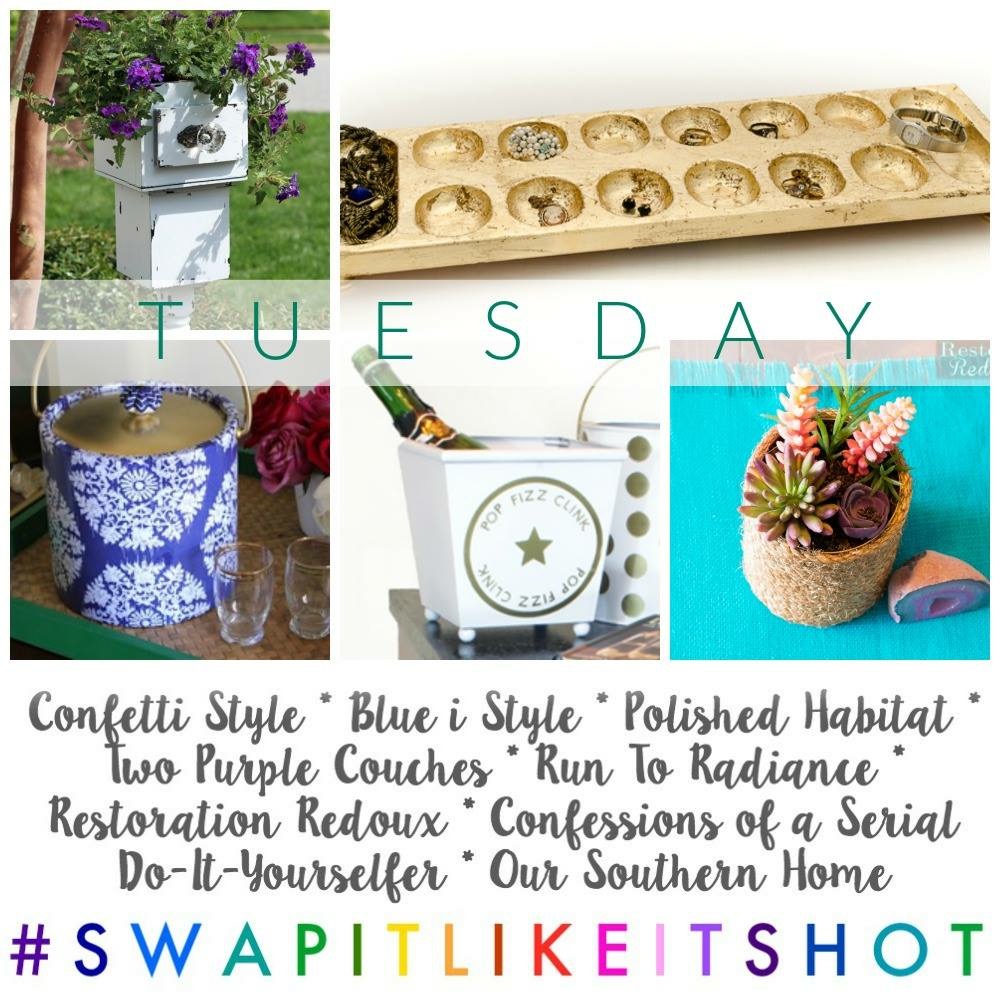 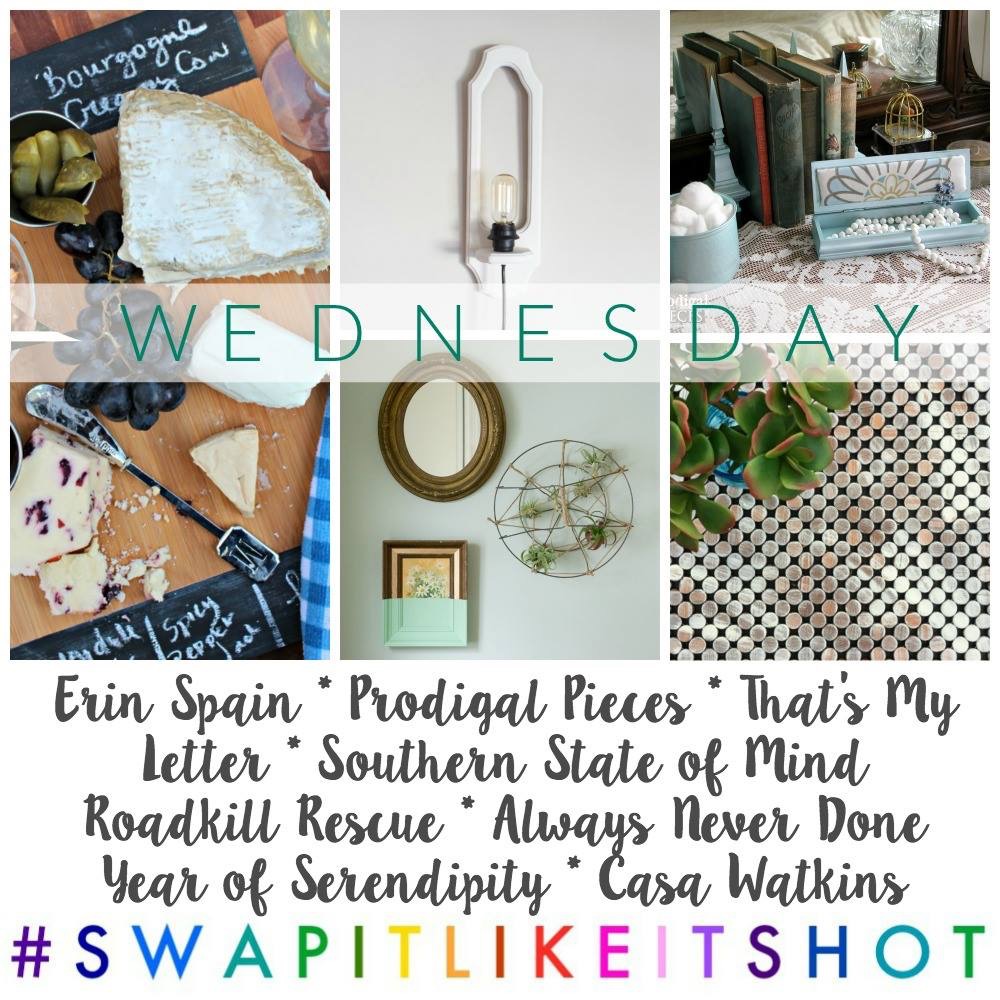 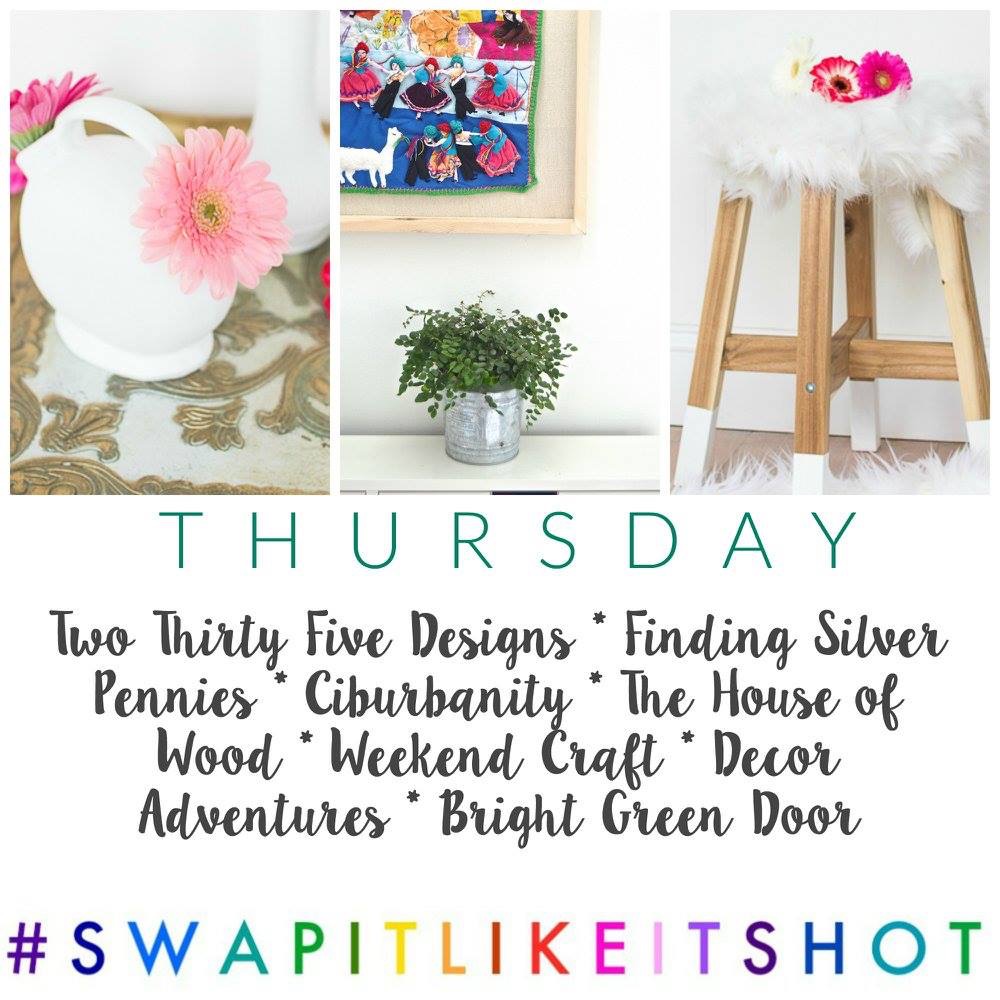 While They Snooze / The Charming Farmer / Primitive and Proper /

A Designer At Home / BrePurposed / Home Made By Carmona / Domicile 37 / 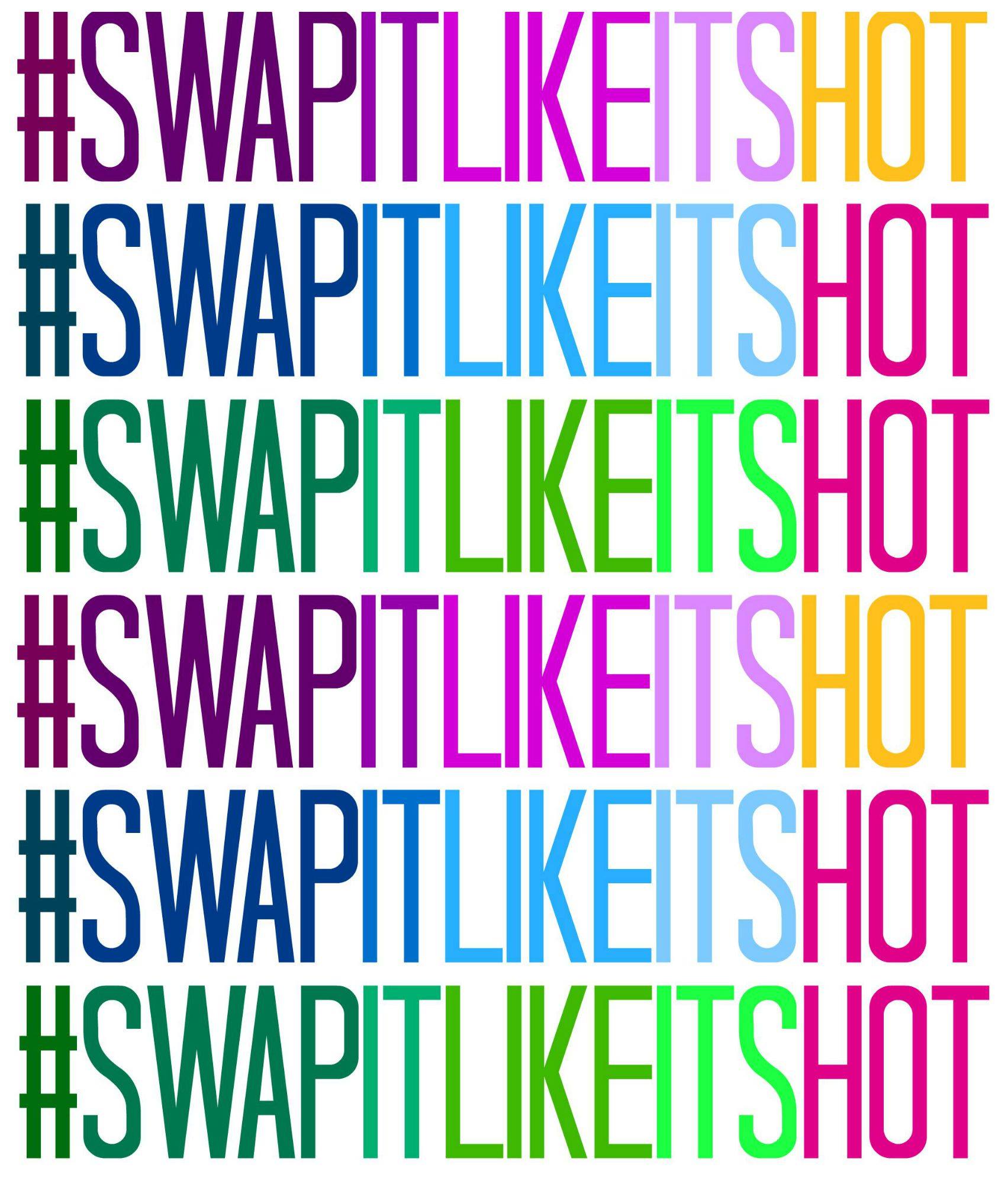