I’m combining yesterday’s and today’s gratitude posts and being thankful for our doggies today. Bear and Hank are the best dogs – they are sweet, loving, goofy, and fun. 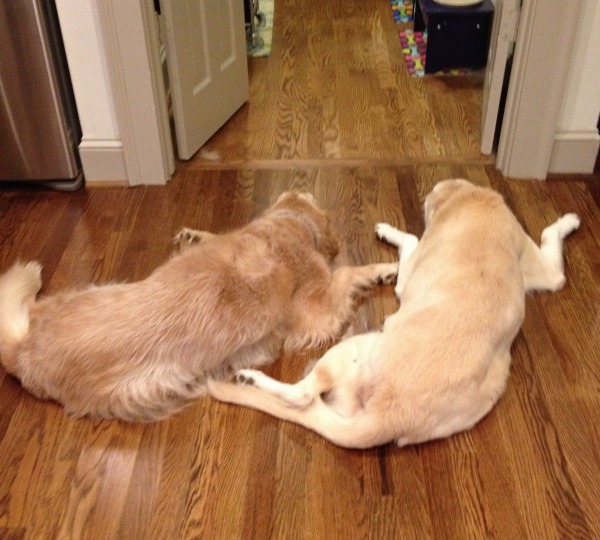 Let me tell you their stories.

I have always been a “dog person.” Growing up, we had two dogs, a mutt named Coco and a yellow lab/golden mix named Rocky. Coco came from the pound; Rocky, from a friend whose dog was galavanting around the neighborhood one day and came back knocked up.

Rescuing animals has always been a passion of mine. In 7th grade, at Sunday school, we had to pick a charity to donate our contributions to each week. I lobbied hard for the Memphis Humane Society and eventually won the day.  In law school, I would go to the humane society and walk the dogs. It was good for me and for the doggies.

I’ve rescued a kitten, too. I found him in the bushes outside my house and eventually earned his trust with tuna. He now lives with my former neighbor.

Anyway, let me tell you about Bear.

When Dear Husband married me, he knew that we were going to get a dog. He had grown up pet-less (I think he might have had a fish at some point) and didn’t know how much joy a dog could bring to his life. But he agreed that I/we could get a dog.  The deal was that we could get a dog, but he got to name the dog.  I agreed. No problemo. “Bear” would be the name of the dog.

We signed up to adopt at Golden Retriever Rescue of Atlanta. We filled out the application, we had a phone interview, we had a home check.  All good. On New Year’s Day, we traveled way out to the country to meet a dog they thought would be great for us.

The dog they wanted us to meet was a male lab puppy. He was WILD. Crazed. Nutty. Totally freaked out my formerly pet-less husband.  No thank you, we said.

We met another dog, a big black lab adult. He was sweet, but still, something told us he wasn’t “the one.”

Then the foster parent brought out this gorgeous leggy blonde. She had a pink nose. She wagged her tail, she looked up at him lovingly, and she did what he said. She was beautiful and sweet. I met her and she was ours. I just knew it.

And here’s the crazy part: the foster parent had given her the name “Reba.”

If you rearrange the letters, you get “Bear.”

We took her home right then and there. She was eight months old.

She is the smartest dog I have ever met.

She knew I was pregnant before I knew. She knows when it’s going to rain before the weather channel does.

Hank (left) and Bear (right) keeping me company the day I broke my leg.

So, what’s Bear’s story? How did she end up with a rescue group?

No one really knows. A woman in a small town south of here found her running down a rural highway and picked her up. She called vet offices and hung signs to see if anyone claimed her, but no one responded. They think that the former owner moved away and just left her behind, and she dug her way out.  Anyway, the nice lady turned her in to Golden Retriever Rescue, and ten days later, she was part of our family.

For the story on why she’s the dog who doesn’t eat pizza, click HERE.

We adopted Hank three years ago, also from Golden Retriever Rescue of Atlanta. We had been looking for a friend for Bear, but Bear is a tough sell. She’s a dominant alpha female, and she doesn’t so much love other dogs.

When a volunteer/friend from Golden Retriever Rescue of Atlanta called me and said they had the perfect friend for Bear, I was curious. I dropped everything and drove out to the ‘burbs to meet this boy.

I walked in to the foster home where Hank was staying, sat on the floor to play with him, and he immediately came over and sat in my lap.

That was it. He was coming home with me. It was as if I had “sucker” plastered across my forehead. I was sunk.

Hank on the ride home – first picture as our dog.

Look at that sweet face. As you can see, he’s pretty psyched, too.

Hank’s story is not uncommon. His former parent fell upon hard financial times and couldn’t keep him. His parent had had him since he was a pup – for almost six years, in fact – and thus Hank now has some separation anxiety issues.

He is usually with me, at my feet or sitting on me. Yes, on me. All 72 lbs. of him. You can often see him in my pictures on the blog, helping with or supervising my projects.

He is storm-phobic, like many retrievers, and thus wants to be on top of someone during a storm. He even climbed in the shower with my daughter once during a storm! (That did NOT go over well with her.)

He is a love. I’m so grateful he adopted us. Even Bear likes him now.

He’s nine years old now, but he has the white/gray on his face that shows he is wise beyond his years.

If you are considering getting a dog, please, please check out your local rescue groups first. There is a rescue group for every breed of dog and in almost every area of the country. Rescue dogs just want to be loved, and they appreciate you so much for loving them and giving them a warm, safe home and a family. Their devotion and love truly know no bounds.

Just ask Bear and Hank. (But no pizza, please.)