You are here: Home / Organizing / Workshop and Storage Shed

It seems like eons ago that I was telling you that we were finally renovating my workshop and storage shed. In fact, it was the beginning of this past summer! I finally finished it when I built and installed the flower boxes for the Power Tool Challenge (and we have a winner, announced below!). Just as a reminder: here’s what it looked like before: 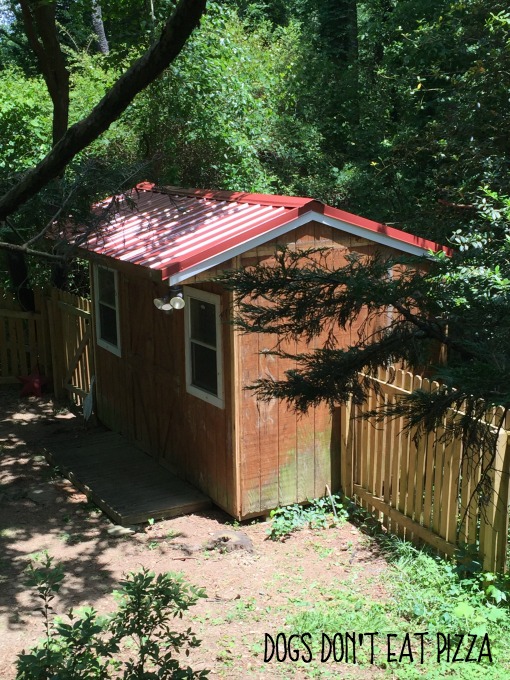 Click on the photo for the before and inspiration ideas.

The roof in the before picture is new; we installed a red metal roof on the shed because the old roof was leaking. But, as you can see from the before picture, we needed to replace the siding, which was rotting and being snacked on by various critters; we needed to remove the rotting step at the entrance; the trim had to be replaced; and I needed to clean and organize the inside, which was a mess after the leak.

My awesome contractor Craig took care of installing the metal roof, the new PVC (won’t rot!) trim, and the cement-board siding. He also rebuilt the doors and added a lock. Time for me to work my magic on the details and the inside…

First, I removed everything from the shed. 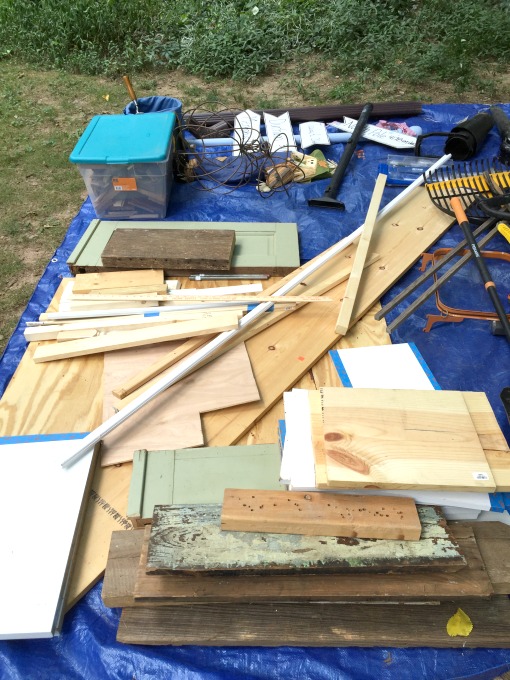 It’s not hoarding if the scrap wood has character, right??

Once I took everything out of the shed, I could see what needed to be tossed or recycled and what could stay. Also, there are some things (like my small miter saw stand) that I don’t need anymore, and those will be sold or donated.

Next, I swept out the shed and planned the organization. As you know from THIS POST and THIS POST, I tend to organize in zones. In other words, I group like items together. For example, in my kitchen, I organized in zones like this: 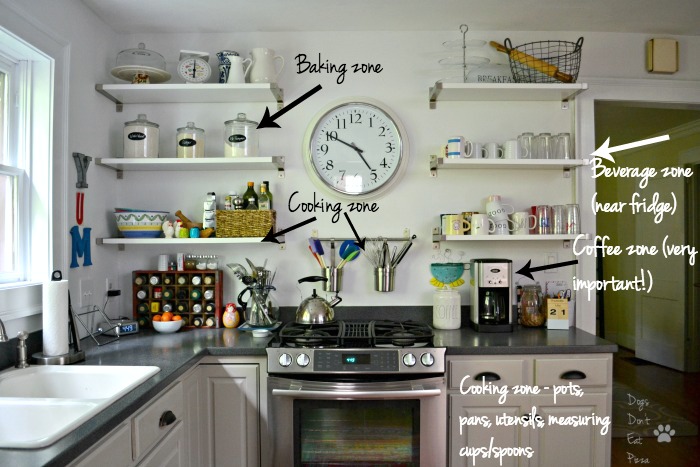 Click on the photo for my five tips for organizing a kitchen.

I applied the same idea to the shed. I knew that I needed a work table, so I kept the cabinet that I already had (see the major bargain I got on it and how I transformed it HERE), but moved it to the left side of the shed. 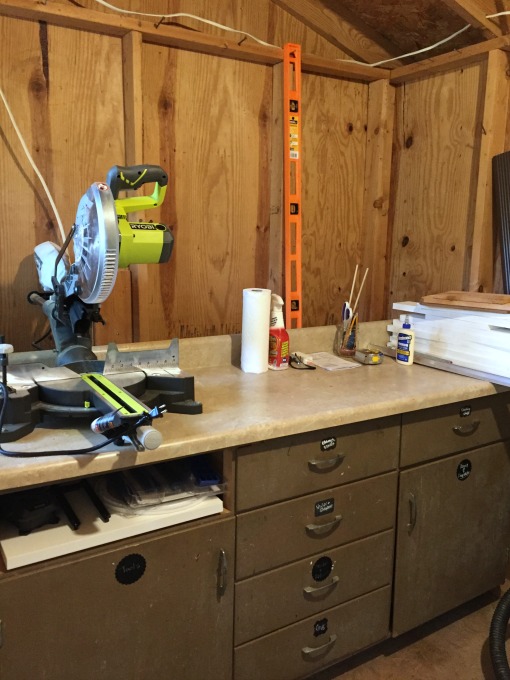 I have a new, bigger miter saw (my old one died – when I had the DIY fail explained in THIS POST) from RYOBI, which I luuuuuuuve! Because it’s so much bigger and more powerful than the smaller one I had before, I had to either get a larger stand (which would take up more room in the shed) or figure out how to bolt it to my already existing work table (which I love).

Guess what I did? Bolted it to the $21 work table I love! I did that by removing the drawer directly underneath where I wanted the saw. 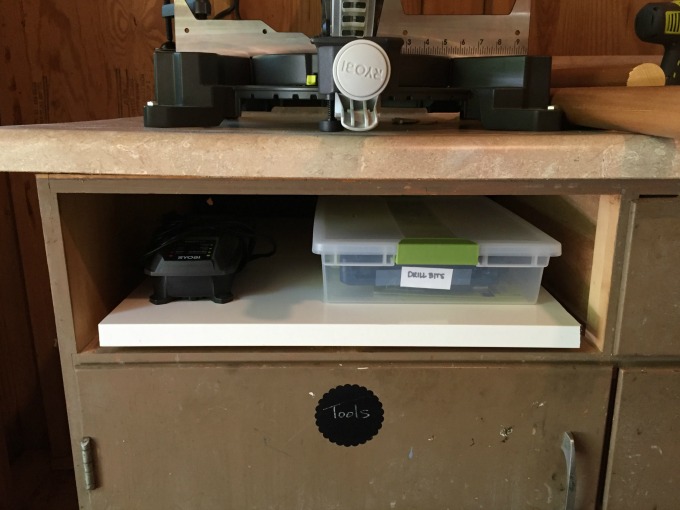 Then, I drilled through the countertop so that the bolts could go through. Removing the drawer allowed me to fasten the nuts to the bolts so that the saw is securely bolted to the table.

As a bonus, the space gives me some open storage! I had an extra piece of laminate shelving in that scrap pile, so I cut it to size and made it the base of a new storage cubby there. You can see I store my drill bits and some battery chargers there now. 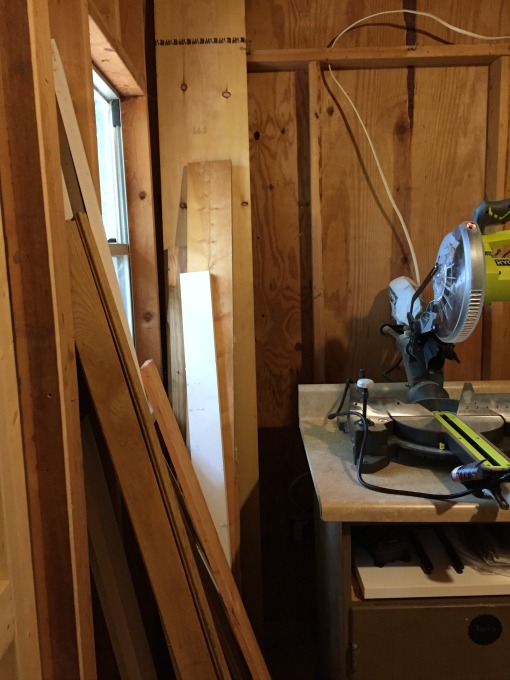 To the left of the saw, I had an open space, which was a great place to store longer and wider scrap wood and boards.

I plan to add pegboard above the work table eventually, once I get a better sense of how I use the space and what I want to hang there. Pegboard would be a great place to store paint brushes, nailers, extra extension cords, and more. Plus, the crisp white of the pegboard would make the space seem larger.

Along with the larger boards, I also had some smaller scrap wood pieces to store. 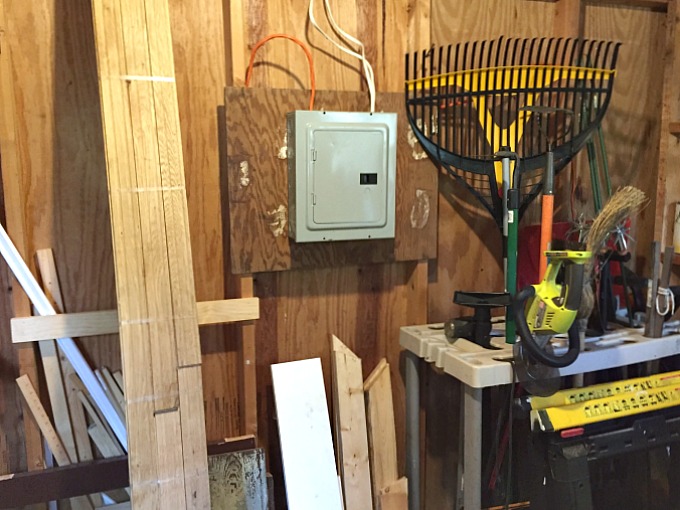 Because I’m on a budget, I didn’t want to spend much on storage in the shed. I wanted to use what was already there or repurpose something. So, I took three pieces of scrap wood, cut them to size, and nailed them to the studs inside the shed to create cubbies for the smaller wood pieces. 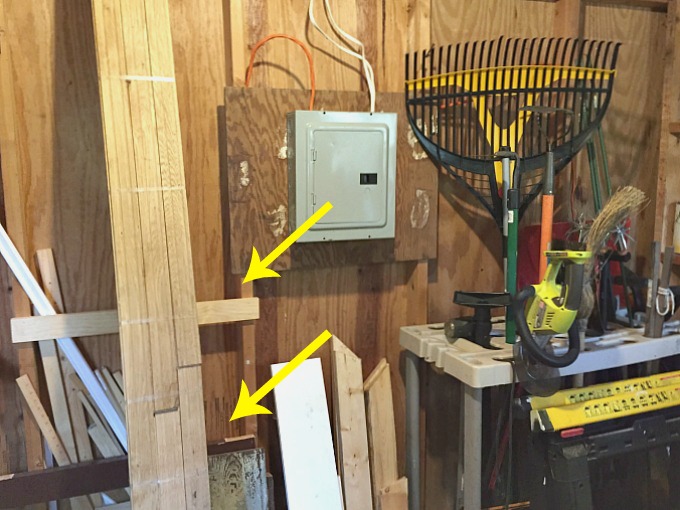 “Free” was exactly what I wanted to spend on that! Perfect!

You can see that my garden tools are stored next to those cubbies along the back wall.

On the adjacent wall are the shed’s original shelves, on which I store paint, stain, and smaller items. 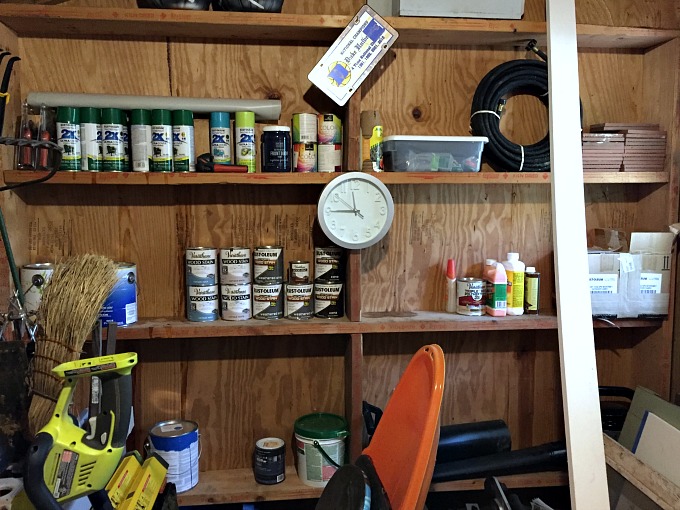 Next to that, I have a spot for old windows, shelving, door parts, and other salvaged goodies that I plan to use at some point. 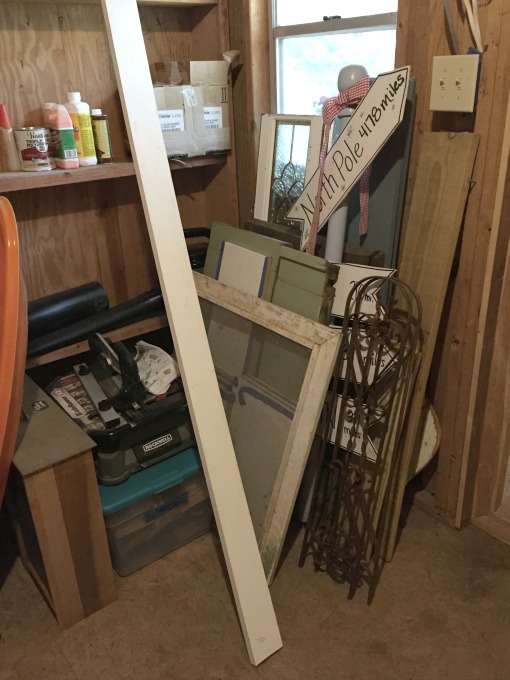 Oh, and my North Pole directional sign – you can see the tutorial for how I made that HERE.

I’m thinking about that window screen as a backdrop for a wreath for the holidays.

In the flower box post HERE, I showed you how I painted the doors the same color as the siding. And, with that, the shed is finished. Well, except for the pegboard. But it’s 95% finished, which is so good! 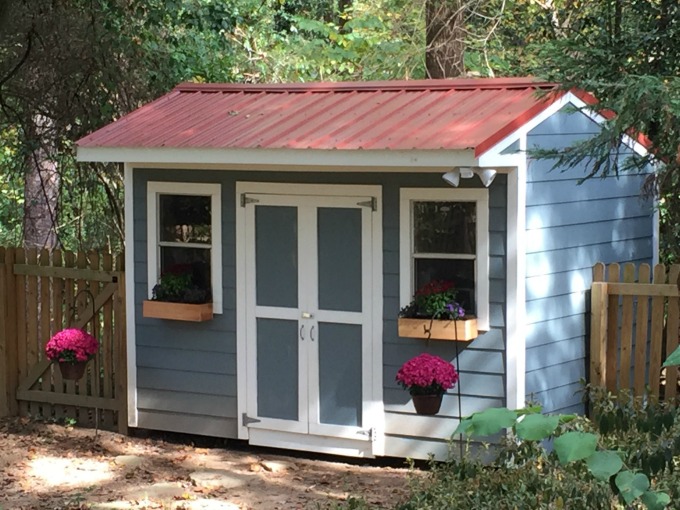 Also, I might build a step up into the shed. The one that was there before was rotted and had to be removed. I found some old stone and some bricks under the porch – I’m going to see if I have enough there to build a step.

I texted my contractor a picture of the finished shed and he said it looked more like a cottage than a shed.

THANK YOU to everyone who participated in the Power Tool Challenge Reader Build! We had more than eighty entries (!!) and it was really hard to choose a winner. But the winner is:

I hope I have inspired you to build something – whether with power tools or paint or scrap wood. Try it – you’ll be hooked in no time! And, as always, if you have any questions, just shoot me an email at karen@thediybungalow.com.

« Friday Five: Asking for Your Vote (for Me!) and Catching Up
Thanksgiving »